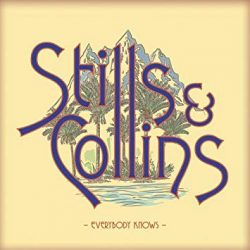 Sometimes you can be genuinely surprised by an album for any number of reasons. In this case, it’s the surprise of seeing these two artists recording together in 2018. There’s no obvious reason why they shouldn’t but it’s odd that they never recorded together when they were a couple yet are doing so now, relatively late in life. Judy Collins is, of course, the subject of famous Stephen Stills songs like “Suite: Judy Blue Eyes” and “Helplessly Hoping”. Their brief affair was already pretty much over as Crosby, Stills and Nash were coming together in 1968 but it served to inspire Stills to write some songs that would capture the imagination of CS&N’s audience, as well as songs that wouldn’t see the light of day until comparatively recently. ‘Judy’, which appears on this album, was recorded as a demo in 1968 but was lost and didn’t appear on record until 2007 on Still’s “Just Roll Tape” album of demos and out-takes. Similarly, Collins own ‘Houses’, her response to ‘Suite: Judy Blue Eyes’, wasn’t recorded until six years after their break up and has also been re-recorded for this album.

There’s a sense of squaring of the circle about this recording. Stills and Collins have, apparently, managed to stay friends over the years and this album is almost a case of “what might have been” – a way, perhaps, to bring some closure to their romantic relationship and speculate on what might have happened if they had recorded together when they were younger.

It’s fair to say that there are no real fireworks on this album. It’s in fairly safe folk/rock territory throughout and, while the songs are very listenable and enjoyable, they’re not going to send shivers down the spine. But both these artists still possess fine voices and they work together very well. There are also plenty of reminders of what a fine guitarist Stephen Stills is. It’s also an interesting collection of material. The album kicks off with a cover of The Travelling Wilburys ‘Handle With Care’, which really shows off how well their voices can work together, showcasing some great harmonies. Stills contributes ‘So Begins The Task’, ‘Judy’ and ‘Questions’ with Collins providing two of her compositions, ‘River of Gold’ and the aforementioned ‘Houses’. There are also songs from Dylan (‘Girl from the North Country’), Leonard Cohen (‘Everybody Knows’, written with Sharon Robinson), Tim Hardin (‘Reason to Believe’) and Sandy Denny’s ‘Who Knows Where The Time Goes’, which has been a signature song for Judy Collins for much of her career.

Some of the production sounds a little dated and it’s hard not to feel that this album might have been more appropriate back in the artists’ heyday, but there are enough fans still around to be intrigued by this recording and, given that there’s unlikely to be any CS&N, or CSN&Y, recordings in the foreseeable future, given the state of relationships between the band members, this might be the only opportunity to hear a new recording from Stephen Stills for some time.

And there is a lot of good stuff on the album. Stand out tracks for this reviewer are Stills’ ‘Judy’ and a fine reading of the title track ‘Everybody Knows’, with some excellent restrained Hammond organ playing from Russell Walden along with beautifully crafted guitar solos from Stills himself and showcasing the best of Stills and Collins’ harmonies. Perhaps there are no fireworks but there is a lot of warmth and Stills & Collins are a combination that could serve both artists well at this stage in their careers.

Veterans team up on an album of well-performed songs