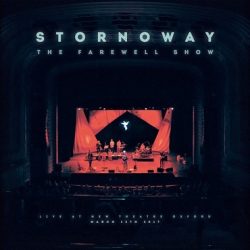 Live albums can be a mixed blessing but in this case, an immensely appreciative audience, a good recording and a vocalist/lyricist of the first order means that this is an excellent package. The album is a valedictory affair recorded in the bands home town of Oxford – their final concert ever – in 2017. Stornoway are filed under an indie/folk/roots label – very English in their subject matter and approach and perhaps wise enough to realise when to call it a day as each of the four members was increasingly drawn to other projects and interests. Three great albums and a busy touring schedule over 10 years all around the world – perhaps more than enough for anyone?

Vocalist and songwriter Brian Briggs is now a warden on a bird sanctuary in Wales – though I would be surprised if he did not keep his musical hand in by some means. With no disrespect to the other members, he is clearly the driving force in the band; gifted with a great voice and the ability to project very clearly lyrics which are right to the fore in a recording of great clarity. Simply put you can hear the words. This should be a lesson to others and it is a bonus because Briggs words, rooted in a great streak of romanticism, are more than worth listening to. Given that he completed a PhD regarding ducks (avians not failed cricketers) it is no surprise that Briggs chose his current line of work – nor that his songs are littered with images of the countryside and its contents. Oceans, seas, birds, rivers, horses, foxes, chickens, the seasons, night and day, rain, trees, bracken, gorse, the wind – and endless hopes of flying. At times it feels like you might have stumbled into some lost work by a happier than usual Ted Hughes.

Take, for example, the use of language in, ‘Invite to Eternity’, exhibiting a genuine facility with words:

“I was listening / To the generators humming / To the tent-zipping drunk / Quipping, guy-rope tripping.”

These are songs of love and desire with a vision of life as a journey in various forms. They range from literal car journeys to flights of imaginative fancy as the particular is contrasted with the universal as on, ‘Farewell Appalachia’.

“And in the canvas of a clear night / A billion pins of flickering light / And I dreamed of rising up beside you / Among the galaxies and stars / And you were taking me to higher ground / Out of my skin above the clouds“.

There are no musical histrionics or excesses here and the instruments serve to support rather than overwhelm the words, which is in no way meant to diminish their sympathetic support to the singer, including some great harmonies and what I believe is known as a perpetual canon on, ‘Get Low‘. The light touch, sprightly drumming is a pleasant change from the usual tub-thumping and there are apposite delicate musical touches throughout. The band are essentially a guitars drum and bass grouping augmented on this occasion by, among other instruments, horns and strings. Very effective they are – listen to the introductions on, ‘The Coldharbour Road,’ and, ‘Farewell Appalachia’. There are one or two short segments of what can only be described as electronic noise that could usefully be dispensed with but they are minor distractions. One quibble would be that the presentation and packaging are rather limited and there is no information as to who plays what other than that the basic band consists of Briggs, Jon Ouin and Rob and Oli Steadman. It’s a basic set-list and photos affair.

The crowd clearly love it all and if Stornoway have a hit it might be the last track, ‘Zorbing,’ which the audience sing word-perfect, in tune and in time before the band take over – its a wonderful moment and filled with a captivating joyousness. The band seem to generate great loyalty in their fans as evidenced by the following story on Wikipedia:

“Radio presenter Tim Bearder was an early champion of the band and was suspended from work after barricading himself in the studio and playing an hour of Stornoway songs from their demo EP, The Early Adventures of Stornoway.”

Way to go Tim! It’s perhaps a measure of the band that they choose to end things in a harmonious way – if there was acrimony I have not been able to discover any details. There seems nothing sad about a band that has produced three and now the fourth final CD of great quality played a host of live shows and then called it a day. This is much more of a celebration than a wake.

As a collection of songs, not a great deal is added to the originals by playing them live, albeit that the originals are of the highest quality.  They are splendid and faithful renditions and in that sense of ‘live’ not a lot is gained; there are for instance no distressingly extended inappropriate instrumental solos. However in terms of atmosphere, the interaction between band and audience, humour and some lyrical changes to suit the occasion, this is as live as an album can get and very highly recommended.

Farewell to a unique and captivating band