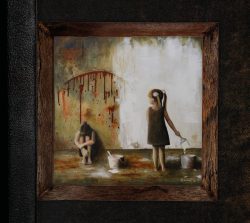 This is an album that asks a big question. That question is, how does a band from Hoddesdon in Hertfordshire, UK manage to get such an authentic Americana sound?! Listening to this album you would swear this band had southern States dirt under their fingernails – it’s dark, broody and moody in all the best possible ways and it has American gothic influences running all the way through it!

Perhaps the main reason for all of this is the subject matter of the album. ‘I Want Blood’ is a concept album based on the story of the Harpe Brothers. Many people in the UK will never have heard of the Harpe Brothers, but it’s a story that bears investigation – especially if you like your tales liberally sprinkled with gore and guts, murder and mayhem. The Harpe Brothers are often credited with being America’s first recorded serial killers; a very dark claim to fame, but these were very dark characters. Micajah “Big” Harpe and Wiley “Little” Harp were born in the mid-late 1700s and were known as highwaymen, horse thieves and river pirates, as well as having been soldiers and plantation overseers. They are credited with at least thirty nine killings and their total tally may have exceeded fifty! It’s a fascinating story and well worth reading up on, though it’s not for the faint hearted.

As the subject for an album of songs the story is an inspired choice and Suburban Dirts do it full credit. The album starts with the menacing ‘The Harpe Brothers’ and one of the more memorable opening lines you’re likely to hear on a record – “We cut them open, carve out their guts, and fill their innards up with stones,” apparently the means the brothers used to dispose of their victims; having filled the body cavity with stones they then dumped the cadaver in the river. The track has a spooky, eerie presence, as you’d expect given the subject matter, driven by distorted guitar and scratched violin, it’s slightly reminiscent of Nick Cave’s ‘Red Right Hand’ and the dynamics of the track are excellent. It really makes you sit up and take notice and is a great entry point to the album.

Just as you think you know what to expect and prepare yourself for an album of distortion and snarled lyrics the second track ‘Home’ kicks in and completely turns your expectations upside down – it’s a short, gentle instrumental, turning on piano and fiddle, that segues into third track “Eli” using the same piano riff that moves into plaintiff vocals setting up a character who will become one of the Harpes’ victims.

Fourth track up and we’re almost into Eagles territory – ‘To Dance With You Again’ is a gentle country-rock ballad that sets up the nastier songs to come – “If I’d never seen the light, would it seem so dark”. Though the first half of the album hints at bad things further down the line, after the opening track much of the music is light and pleasant, constructed around simple, homespun sounding melodies and tight harmonies.

The pivotal track for the album is ‘The Wedding & The Uninvited,’ an instrumental track that starts off in a jaunty, upbeat tempo full of dobro and mandolin licks and then takes a turn into some very dark and nasty passages. You don’t need to be a ‘Game of Thrones’ fan to know what’s going on here. The storytelling on this album is first rate and the band have taken this tale of death and destruction and crafted a really excellent album around it.

This recording sounds like a game changer for UK Americana. I would defy anyone to identify Suburban Dirts as a UK band based on this record. It sounds completely authentic and I think the band have set a new high that shows just how far UK Americana has come in recent years. To take a subject matter like this and build an entire album around it, while staying true to the musical styles and instrumentation that forms the basis of what we have come to recognise as Americana, would be quite an accomplishment for any band. That it has come from a band based in Hertfordshire UK is a big statement about the state of this genre of music in this country.

The only downside to the album is that, in places, it does sound more like a soundtrack than a collection of songs. This is intentional on the band’s part; John Wheatley, guitarist and lead singer for the band has said: “We really did feel like we were working on a film or a novel, which helped us ground the content and the mood of each song, and the dynamic of the album as a whole. We would love to turn it into any one of these.” You can understand the approach but, at times, it does make some of the tracks sound a little contrived and a couple of them would struggle to stand alone, outside the concept format. These are small, subjective, points and in no way diminish the impact of this excellent album.

‘I Want Blood’ is an album that should be of primary interest to anyone who appreciates the Americana genre – but its appeal should go beyond that. This is an intelligent, well made album that tells a fascinating and chilling story and tells it very well indeed. Outstanding.