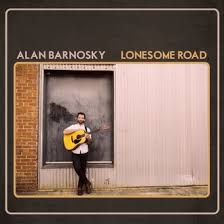 Alan Barnosky’s sophomore EP ‘Lonesome Road’ sees the Michigan-born musician switch from a mainly single guitar and voice format in his debut album ‘Old Freight’ to a full-blown bluegrass album complete with a multi-member backing band. But there will likely be few complaints about the end result either way. END_OF_DOCUMENT_TOKEN_TO_BE_REPLACED

Flatpicker Alan Barnosky picked up some nice reviews for his first release,  ‘Old Freight‘, and his upcoming follow-up ‘Lonesome Road‘ from which today’s premiere is taken, is likely to do the same.  Barnosky’s music is Bluegrass to the core – reflecting years of playing since his teenage years. Back then he was an upright bass player, but a move from Michigan to North Carolina in 2012 also saw a switch to guitar as he recalls “I…fit my most essential belongings into a 4-door car, unfortunately an upright bass would have taken up just about the entire car, so that got left behind – but I did squeeze in an old acoustic dreadnought guitar” END_OF_DOCUMENT_TOKEN_TO_BE_REPLACED