After the first line-up announcement for the UK’s newest Americana & Country shindig, Black Deer Festival which takes place in Kent at the end of June, more acts have been added to the bill. Joining Iron & Wine, Passenger, Ward Thomas and AMA UK award winner Jason Isbell and the 400 Unit in a UK festival exclusive, Kiefer Sutherland, Ashley Campbell, Sam Palladio, The Webb Sisters and Bob Harris’ Emerging Artist winners Wandering Hearts have now been added to the line-up.  Here in the further reaches of Scouseville we’re wondering “why is Kent so far from Liverpool?” but then we’re still making plans. Fickle essentially. Head to the festival’s official website for more details and while you do that listen to the sweet strains of Iron and Wine. Both will be available on site (well maybe not an iron) END_OF_DOCUMENT_TOKEN_TO_BE_REPLACED

News this morning from our sticky friends over at Paste who hosted  Tommy Emmanuel in their midtown Manhattan studio last week.  They report: “Emmanuel performed three songs and discussed his new duets album, Accomplice One. The album features collaborations with artists such as Ricky Scaggs, Amanda Shires, Mark Knopfler and Jason Isbell, among many others. During his Paste session interview, Emmanuel specifically opened up about what it was like to work with Isbell. END_OF_DOCUMENT_TOKEN_TO_BE_REPLACED

Lovely news overnight from the Grammys with some so well deserved wins for Jason Isbell and Aimee Mann amongst others.  RS reports: “Jason Isbell, Alabama Shakes and Reba McEntire were early winners at the 60th annual Grammy Awards when the Americana and roots music categories were announced during the pre-telecast Premiere Ceremony, streamed live online. Isbell triumphed in both the Best Americana Roots Song and Best Americana Album categories, for “If We Were Vampires” and The Nashville Sound, respectively. Emerging from the back of the Theater at Madison Square Garden, Isbell ambled to the podium. END_OF_DOCUMENT_TOKEN_TO_BE_REPLACED

Well this from RS will cheer up your dreary Tuesday morning: “The sight of Jason Isbell and Amanda Shires sharing the mic together became a familiar one throughout 2017, as the husband-and-wife Americana power couple solidified their musical bond while touring behind Isbell and the 400 Unit’s chart-topping The Nashville Sound. This weekend’s episode of Austin City Limits catches them in peak form for a double-billed performance that includes an online exclusive of a John Prine cover. END_OF_DOCUMENT_TOKEN_TO_BE_REPLACED

A musical you might actually want to watch, like the silver lining in a big dark cloud. Rolling Stone reports: “Eighty years after it was first put on film, and 41 years after a turbulent but hugely successful remake starring Barbra Streisand and Kris Kristofferson, the latest version of A Star Is Born is headed to movie theaters once again. Also a starring vehicle for Judy Garland in 1954, the oft-told tale of a show-business couple at opposite ends of their fame, returns to the big screen with a wide-ranging soundtrack featuring song on which the film’s star, first-time director Bradley Cooper collaborated with Jason Isbell, Lukas Nelson, Mark Ronson and Lady Gaga, who co-stars with Cooper. END_OF_DOCUMENT_TOKEN_TO_BE_REPLACED

Robert Peston has written a piece for today’s New Statesman in which both he and Jeremy Hunt manage to insult Jason Isbell in the space of one paragraph: 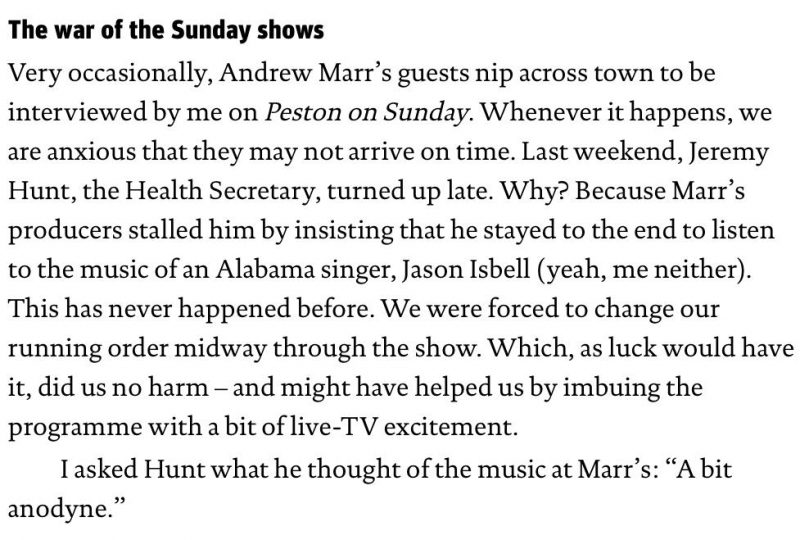 The more worrying thing of course would have been if Jeremy Hunt had said he liked Jason Isbell. Imagine the shame.

The resplendent setting of a former Methodist hall in central Manchester was a suitable venue to welcome Jason Isbell back to these shores and an expectant congregation of devotees were not disappointed by an evening that showcased perfectly the strengths of one of America’s finest artists and his excellent band. END_OF_DOCUMENT_TOKEN_TO_BE_REPLACED

Jason Isbell made an appearance on the Andrew Marr show yesterday morning playing the track If We Were Vampires from his latest album.  Described by Marr as “the maverick star of americana” you can catch the performance in the last five minutes of the show here although be warned if you click back to early you may have to endure the horror of watching Jeremy Hunt look like he expects to be given the job of Chancellor in the not too distant future.  And if the track whets your appetite, why not catch his whole Tiny Desk Concert below. END_OF_DOCUMENT_TOKEN_TO_BE_REPLACED

A double dose of Isbell news today as Stereogum report with a ‘don’t bite the hand that feeds’ bent: “Jason Isbell doesn’t make country music, at least not in the traditionalist sense of the word, and exists entirely outside the mainstream music industry in Nashville. (The title of his most recent album, 2017’s stunning The Nashville Sound, seemed to be at least in part a dig against the way the town works.) But people in the country music establishment seem to be recognizing that Isbell is doing great work. And now The Tennesseean reports that the Country Music Hall Of Fame has named Isbell its 2017 Artist-In-Residence. END_OF_DOCUMENT_TOKEN_TO_BE_REPLACED

A match made in heaven as it were.  RS Country report: “”I’d like to bring out a very special guest,” Jason Isbell told a hometown crowd at the Ryman Auditorium last night, during the final moments of his band’s unprecedented, six-night run at the historic venue. “As far as I’m concerned, he’s the best musician in town, which makes him high on the list of the best musicians in the whole wide world. Our dear friend, Mr. Jerry Douglas.” END_OF_DOCUMENT_TOKEN_TO_BE_REPLACED