Apologies for completely missing this last week – Josh Ritter played one of NPR’s magical little Tiny Desk concerts last week, as they described it “with the enthusiasm of a young child and the wisdom of an old soul”. Accompanying him was Amanda Shires on fiddle and Jason Isbell on acoustic guitar, both of who played on Ritter’s recent album ‘Fever Breaks’ which indeed Isbell produced. You can watch it below. END_OF_DOCUMENT_TOKEN_TO_BE_REPLACED

It was another warm evening for this second night of a two-night stand at London’s famed Union Chapel – the record-breaking temperatures of the day trailing off with a long tail. Under the stage lights, Josh Ritter, with his full band backing him, was showing the effect of the heat but held nothing back on a set which revisited some of his back catalogue but was also a great opportunity to hear the really strong new songs from his latest album ‘Fever Breaks’ live. It was a setlist with two themes – respecting the venue, there seemed to be many of Ritter’s songs which make use of religious, and specifically Christian, imagery with a second strand of concern for American democracy. END_OF_DOCUMENT_TOKEN_TO_BE_REPLACED

Josh Ritter’s latest album, ‘Fever Breaks’, produced by and featuring Jason Isbell, has been critically acclaimed with many commentators calling it a highlight of his 20 year long career. We here at Americana UK agree with that, our review awarding the disc a whopping 9/10. To support the album release Ritter has just announced a European tour including several dates in the UK and Ireland. END_OF_DOCUMENT_TOKEN_TO_BE_REPLACED 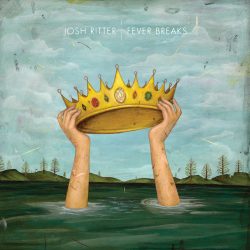 For his tenth studio album Josh Ritter has teamed up with the currently red hot Jason Isbell and his 400 Unit on production and playing duties and delivered an album that will only do all of them a lot of good. This is an Americana wet dream become real! All the cards are on the table from the opening groove of ‘Ground Don’t Want Me’, Ritter’s spoken-sung poetic lyricism, muscular Isbell guitars, stentorian piano shapes, chiming solo, chorus laced with harmonies and all of this wrapped in one of those tunes you are sure you’ve heard before but know you haven’t.
END_OF_DOCUMENT_TOKEN_TO_BE_REPLACED

Well this is a treat for the Easter weekend – NPR are previewing today the new Josh Ritter album ‘Fever Breaks’ which is due out on Friday next week and which, of course, is produced by Jason Isbell, whose 400 Unit serve as the backing band for the record. NPR comment: END_OF_DOCUMENT_TOKEN_TO_BE_REPLACED

Rolling Stone Country have published a flurry (the non-snow variety) of good tunage over the last few days which you won’t want to miss, so we’re posting them here.  First up is Calexico and Iron & Wine who are reuniting for their new collaborative album ‘Years to Burn’ due out June 14th a full fourteen years after they teamed up to release the 2005 EP ‘In the Reins.’ END_OF_DOCUMENT_TOKEN_TO_BE_REPLACED

Exciting news that Josh Ritter is returning with his tenth album, ‘Fever Breaks‘.   If the first single is a guide – and we’ve a feeling it is – then ‘Fever Breaks’ is going to be Josh Ritter’s rockiest album since ‘Historical Conquests‘.  Some of this sound could just be due to the presence of Jason Isbell and the 400 Unit.  Could this, already,  be a taster for the album of the year ?  You know what, it just might be.

Rolling Stone Country have got a lovely little piece up today about Josh Ritter’s forthcoming new album which is more political than some of Ritter’s offerings to date, and which features the 400 Unit as his band. It basically sounds awesome. They report: “It’s a rainy November evening in Nashville and Josh Ritter and Jason Isbell are huddled in front of the console at Sound Emporium Studios, an historic space located in an otherwise nondescript building in the city’s Belmont neighborhood. END_OF_DOCUMENT_TOKEN_TO_BE_REPLACED

Paste are carrying the new single by Josh Ritter today, the second track to be released from his new album “Showboat” which is out on September 22nd. He told them: “Ever notice how on postcards you can’t tell if the sun is coming up or going down? This was in my head for several years as I rolled the idea around, tried to make it fit and then gave up… Finally, one day, between walking the dog and putting the kid to bed, I sat down and played a few chords at random and the idea rose to the surface like a hungry fish. The song itself took about ten minutes to write—proof that most of the time even when I’m feeling lazy and useless, there’s a song going round and round in the back of my mind, forming and waiting for its chance to hit the stage.”

The lovely Josh Ritter is back with his ninth full-length album ‘Gathering’ which comes out September 22nd on Pytheas Recordings/Thirty Tigers. Ritter will be heading out with his “Royal City” band over the course of this winter, including a date at London’s Shepherds Bush Empire on 5th December. Speaking of the album he said “I have been writing records for almost twenty years now. Each one has been different from the last in subject and form, but with Gathering I feel I’ve found a new electric dissatisfaction, a new way to rejoice as the storm rolls in”. Quite apt for today.  You can hear the first track Showboat below in the form of one of those nice singalonga lyric videos.