At AUK we are on a quest to find the ‘top 10 americana albums ever’. Over the last few weeks our writers have been going through the mental anguish of trying to narrow the whole history of Americana down to just ten albums. When every writer has had their say, a shortlist of the most frequently chosen albums will be drawn up and voted on, in order to generate the definitive AUK writers top ten.  This time we turn to AUK deputy editor Jonathan Aird for our weekly shot of americana greatness: END_OF_DOCUMENT_TOKEN_TO_BE_REPLACED 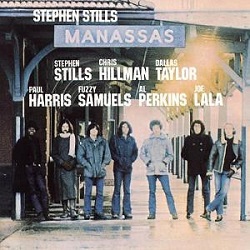 His bandmate Graham Nash may have sung prophetically of being ‘King Midas in Reverse‘ – everything that is touched would turn to rust – but there was a golden period from the release of ‘Crosby Stills and Nash‘ in 1969 until maybe as late as 1977 when all that the trio, and occasional quartet with Young, touched was if not pure gold then a good quality alloy of gold and silver. Amongst all their combined outpourings as various solo, duo and full trio outputs there was also Stephen Stills’ incomparable side-band Manassas. END_OF_DOCUMENT_TOKEN_TO_BE_REPLACED