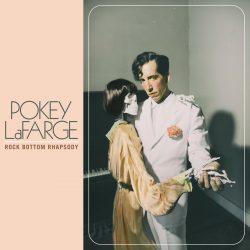 Pokey LaFarge has been a busy man in his 14 year recorded career and, ‘Rock Bottom Rhapsody’, is his 9th album, the last being recorded in 2017. His current offering is his first on New West Records and produced by Chris Seefried who also co-wrote several of the songs. LaFarge recounts the story of the album thus. In 2018 he moved from St. Louis to Los Angeles and entered a time of downward dissolution. Many of the songs were written in that time and, ‘Fuck Me Up’, certainly encapsulates all that needs to be said about that period and is probably one of the stand-out tracks. During the recording of the album, it seems LaFarge had a spiritual awakening or found God as we might say. He makes the point that the man who wrote the songs is not the man who sings them now – and probably just as well. END_OF_DOCUMENT_TOKEN_TO_BE_REPLACED

Pokey LaFarge dressed as the devil! Pokey LaFarge singing from his coffin at his own funeral!  The gloriously creative and cinematic new video from LaFarge is a great, colourful accompaniment to his sound, which manages to feel both fresh and old-time simultaneously.  His new album, ‘Rock Bottom Rhapsody’, is his first in over three years and will drop on 10th April.  After LaFarge moved to Los Angeles, the new songs came quickly but so did new temptations and a fall from grace.  The album promises to reflect those dark times.

Well worth a listen if you have a spare three minutes and 40 seconds in your life, and he’s playing some dates in the Netherlands next month. Rolling Stone reports: “Roots performer Pokey LaFarge calls St. Louis his home, and the racial tension that boiled over after Michael Brown’s fatal shooting by police in neighboring Ferguson informs his new song “Riot in the Streets.” It will appear on LaFarge’s new album Manic Revelations, out May 19th.  END_OF_DOCUMENT_TOKEN_TO_BE_REPLACED