A member of Latin country-rock band The Mavericks has reported being assaulted over the weekend “for speaking Spanish.” Trumpet player Lorenzo Molina Ruiz described an assault that he and his friend Orlando Morales endured while at a sports bar Tony’s Eat & Drink in Franklin over the weekend. Ruiz created on a GoFundMe for fellow musician Morales which has already raised over $20,000. Betty Malo, the wife of Mavericks lead singer Raul Malo, shared an account of the incident on her Instagram account which you can read below. END_OF_DOCUMENT_TOKEN_TO_BE_REPLACED 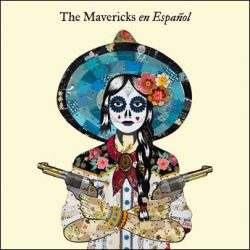 The Mavericks, in keeping with their name, are a band that has consistently denied attempts to pigeon hole their music, which has blended a wide variety of styles since their birth as a band in Miami in 1989. After a heyday in the 1990’s, which brought both commercial and critical success, including a Grammy for Best Country Performance by a Group for ‘Here Comes the Rain‘ in 1996, the band split in 2003, reforming in 2012. Latin stylings have always played a big part in their sound–as in their most successful UK hit, ‘Dance the Night Away‘ from 1998–reflecting the bands Cuban-American roots, but their latest release, ‘En Español’, is their first album exclusively in the Spanish language.

END_OF_DOCUMENT_TOKEN_TO_BE_REPLACED

It’s hard not to tap your feet and smile when The Mavericks perform.  This is the first single from the band’s first ever collection of Spanish-language songs, a mixture of originals and Latin classics.  ‘En Español’ is a great move from the Grammy-winning band.  Their output is hugely varied, covering a range of styles, but the uplifting, distinctly Maverick sound is a great fit for this.  Raul Malo of The Mavericks says: “This is the record I’ve been wanting the Mavericks to make for a very long time. I’m a first generation Cuban-American, and some of these songs are songs my family would play and sing on weekends at family parties and get-togethers. But it’s not all nostalgia either. There are plenty of new original songs that put this record squarely in the moment for us.”  Enjoy.

For Americana UK, this year’s Nashville experience ended where it pretty much started – at Robert’s Western World on Lower Broadway. Hotfoot from arriving in the city around 7pm our assembled scribes headed straight downtown to see Joshua Hedley and the Hedliners. These showcases at Robert’s are something of a Nashville institution for both discerning locals and tourists – performing classic country sets from the 1950s and 1960s, Hedley’s velvet croon and stellar backing band which includes Buck Owens’ drummer and a long standing pedal steel player with Merle Haggard, demonstrate their encyclopaedic knowledge of country music and musical chops over a set spanning three and a half hours. END_OF_DOCUMENT_TOKEN_TO_BE_REPLACED

It’s the last night of Celtic Connections and the big guns are wheeled out for this packed show at The Old Fruitmarket. The doors opened one hour before the support band were due on and by the time your scribe arrived there already was a good crowd packed up front, camped out as it were in order to get a close up view of The Mavericks, and an odd crowd, not one you’d expect at a Celtic Connections gig. Although there were no pink Stetsons on show this was the type of crowd you’d get at a Dolly Parton concert, star quality drawing in the paying public who want a good time and a good time was what the headliners delivered tonight. END_OF_DOCUMENT_TOKEN_TO_BE_REPLACED