It may have been another turbulent year with no sign of the punishment letting up, but it has also been another great year for music. And, in a sense, that’s what really matters. And if nothing else the real world has offered some amusement on the live scene as visiting bands from the USA make clear who did, and who didn’t, support the incumbent of 1600 Pennsylvania Avenue. The latter by noting the madness in their country and typically saying something like “don’t blame me“, the former by withholding any comment on the subject at all, as if it’s just business as usual. Most bands and artists though fell into the second camp with a commitment to progressive policies as likely to come from honkytonkers as the usual suspects like…oh, David Crosby. Let’s talk about music though – and the usual reminder that this is a personal review of the year, not the official Americana-UK statement, and so of course is based on what I’ve actually managed to hear whether it be individual songs, albums or live performances. It would be bizarre to bemoan the amount of music that’s out there – but with only so many hours in the day inevitably some superb releases will have been overlooked, and, sadly, some gigs just couldn’t be got to (Darlingside was not to be!). And the further caveat is of course that even I won’t be pinned to supporting the inevitable top ten lists to be found below – still listening to new stuff, so who knows, an even better song may be coming along at any moment!

It seems like there have been some sizeable shifts in the Americana scene – Darlingside are following the likes of The Milk Carton Kids in redefining an American folk sound based on great melodies, meaningful lyrics and superb vocal harmonising. And a good portion of Alt-country seems to aligning itself with an Outlaw-Country revival – JP Harris, Tyler Childers and many others leading the charge there both on record and with high energy performances live. And showing them how it’s done was Steve Earle at The Barbican.  Not that there’s any shortage of singer-songwriters and other country bands – Kim Richey and Kashena Sampson both provided excellent new albums in the latter category whilst David Crosby continues his late creative spurt with new albums and tours with his new bands and Steve Forbert had a new album, a new book and a UK tour.

The year got off to a mostly good start with a raw and ramshackle Deer Tick at Islington Assembly Hall, and an excellent night of showcased acts at the Americana Music Association showcase – Kashena Sampson, The Americans, Steve Grozier were highlights but with five stages running consecutively there were many clashes – and it’ll be even worse next year as there’s two showcase evenings. That’s worse in the sense of better – more clashes, but double the music to choose from – The Canadian Showcase looks particularly fruitful. 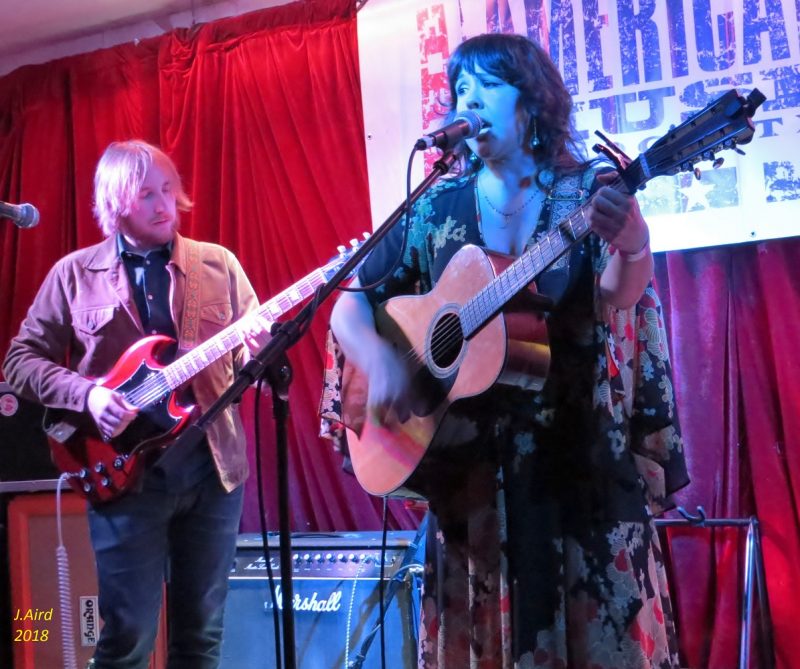 The downturn in the weather at the end of February caused problems at the Cambridge City Roots festival – Tom Robinson gave a bravura performance to a shrunken crowd, depleted by the heavy snow, and on another evening there was a frantic attempt to keep a showcase line-up going on the worst affected night – which saw opening acts promoted to top billing, and then a whole new line-up announced, as the bands failed to make the venue! How that turned out I really don’t know – it was the worst weather night of the festival and after crawling along in a car for ages at about 5 miles an hour good sense finally kicked in and the journey had to abandoned by this reviewer. Cambridge did offer some great gigs at The Corn Exchange though – and of particular note was Nils Lofgren who was masterly of the guitar.

It was quite a year for catching musicians whom one might have thought would have been giving up on European jaunts – Mavis Staples was regal at The Union Chapel, full of vocal power and righteous anger at the new rising tide of intolerance and bigotry in her homeland. At the other end of the spectrum room-wise, Geoff Maulder was a surprise treat at the tiny Stables2 – engaging, witty and with a whole pack of great songs. In the larger Stables main hall Tom Paxton was also fired up, mixing in some “telling it straight” songs alongside the well-known hits. Two bands that deserved bigger audiences were Thomas Wynn and the Believers who rocked The Horn in St Albans to a crowd that may have been even smaller than those who’d turned out for Cam Penner and Jon Wood at The Green Note. No such problems for David Crosby who played, with characteristic intensity, to a capacity crowd at Shepherds Bush Empire. His take on ‘Ohio‘ was devastatingly strong.

It was also a year for strange venues – I have a suspicion that Steve Forbert is determined to never play the same room twice which saw his appearance in Cambridge at The Robinson Theatre, which is the performance space of a sixth form college, but this was as nothing compared to Chuck Prophet, Stephanie Finch and Jesse Malin at Harpenden Public Halls. No room could look more like a school assembly hall, even without the fold-up school issue chairs, a fact that the joint headliners seemed to find as bemusing as the audience did. And yet – a great gig.

A late run of superb music at intimate venues such as The Lexington, Omeara, and  The Islington closed the year with the likes of  – Juanita Stein, Dan Stuart (with Sid Griffin & Tom Heyman), JP Harris, and Great Lake Swimmers.  On the folkier front nothing could top the appearance of Andy Irvine and Paul Brady at The Barbican, a real dream of a concert featuring four men – Donal Lunny and Kevin Burke from the original recording were also there – completely at ease with their music and the legacy of the landmark ‘Andy Irvine/Paul Brady‘ album. Other good news is that John Spiers has found a new buddy to tour with as a duo – Knight & Spiers isn’t just a retread of Boden & Spiers, there’s different music and a different feel to their collaboration.

And albums – so many albums – with the latest releases from Bob Dylan’s Bootleg series and a superb Tom Petty retrospective leading the reissue charge, although there were also very welcome reissues from The Long Ryders of ‘State of our Union‘ and ‘Two-Fisted Tales‘ as well as a rather good Altered Images box set(!).  On the new material front it’s worth mentioning albums by  The Jayhawks, Courtney Marie Andrews, Old Crow Medicine Show and the ever superb Milk Carton Kids.

There goes the last DJ

Where an attempt is made to identify the ten finest songs of 2018. A truly Sisyphean task.

1. ‘For Once In My Life’ – The Decemberists. Colin Meloy and his jolly japing cohort of compadres tunefully point out that the Universe doesn’t give a flying fig.

3. ‘Makeout At The Drive-In’ – The Garrys. An hypnotically simple track that just makes the hand hit the replay button.

4. ‘Letters & Photographs’ – Rebekah Rolland. Rebekah Rolland has a beautiful voice, and this song is wonderfully reflective as old times are poured over.

5. ‘Americana’ – Nickel & Rose. There are roots to the music we love and Nickel & Rose here call-out those who try and forget that and appropriate it for some small musical enclave’s enjoyment: “these things don’t just happen and I just can’t believe somebody else’s version of my own history“.

6. ‘My Parka Saved Me’ – I see Hawks in LA. A comically true story of near-death and a confirmation of paternal love.

7. ‘When I Quit Drinking’ – JP Harris. A joyful combination of wordplay, musicality and one of the great new alt-country voices.

8. ‘Chase Wild Horses’ – Kim Richey. A characteristically tuneful rejection of the past and bad old ways.

9. ‘Swim’ – Cruel, cruel. A stunningly perfect psych-surf song. If you like The Sadies, you’ll love this.

10. ‘This Summer Love’ – Chris Stills. A cross between Bacharach & David and Harry Nilsson on this richly warm track from Stephen Stills’ son.

Act two – where the finest albums of the year are identified.

There were at least another 10 or 20 albums that could have been listed – but, hey, we’ve got rules for a reason.

1. ‘I’ll Be Your Girl’ – The Decemberists.  Mixing high energy stadium rock ready cuts with more familiar Decemberists dark-folk songs made for an album that got spun time and time again.

2. ‘At War With Reason’ – Cam Penner. An album that sounds like no other – Cam Penner and Jon Wood struggle with the contradictions of freedom and responsibility to others.

3. ‘Seed & Silo’ – Rebekah Rolland. This is the thing that makes it all worthwhile – coming across a true world class talent. This is a gorgeous album with an astonishing vocal and songwriting talent.

4. ‘C’est La Vie’ – Phosphorecent. At last a return of Americana’s dark spirit – flecked through with hope this time.

5. ‘The Lookout’ – Laura Veirs. Having lost none of her lyrical ability, Laura Veirs produced an album that carries hints of her earlier work but leavened with her lessons learnt about living.

6. ‘13 Rivers’ – Richard Thompson. Returning from his acoustic excursions of recent years, Richard Thompson delivers a frantic side of fear and dread, mellowed by a side of love and reflection.

9. ‘An Average Woman’ – Van Wyck. This downbeat and melancholy album really spins a web, drawing the listener back again and again.

10. ‘Black Velvet’ – Charles Bradley. Yes, the studio sweepings – released as a tribute to this great talent taken too soon. But what sweepings!

About 9:30PM, while traversing a long vaulted corridor

It’s dark and gloomy, it smells bad and the floor is sticky in a particularly unpleasant way. This must be where the gig’ll happen. It’s been another great year for live acts.

1. Anna Tivel / Jefferey Martin – Green Note, London. A low key evening of singer-songwriter perfection, both artists are worthy of attention. Anna Tivel in particular has emerged as one of the finest of her generation with an acute eye, a fantastic turn of phrase.

3. Andy Irvine & Paul Brady – The Barbican, London. This was a dream of a gig – one of the landmark albums of folk played by the original four musicians. Majestically relaxed.

5. I see Hawks in LA , Green Note London. Intimate gig showcasing the new album and a clutch of classics from the band that captures that West Coast attitude so perfectly.

6. Mavis Staples, Union Chapel, London. “Reach out and hold a hand” – Mavis Staples is a legend, this performance was legendary (and will be available as a live album next year).

7. Cam Penner & Jon Wood , Green Note, London. They rocked that Golden Circle – we were the Golden Circle and they were powerful strong of music. Oh yeah.

8. Israel Nash, Scala, London. It’s amazing that a talent as great as Israel Nash can still be seen in relatively small venues. This won’t last forever!

9. Handsome Family , Nells Folk & Blues, London. Even Rennie’s heavy cold – and desire for suitable “medication” – couldn’t prevent this from being a quality performance of Americana that’s strange and seen from different angles.