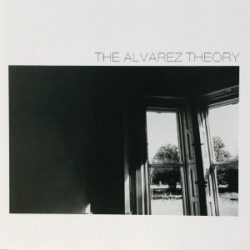 Starting life as a solo project for Diana (Dee) Diehl, The Alvarez Theory have produced an album of gentle, intimate songs. The band describe them as “tales of small-town heroes, barflies & gunslingers, heart breakers & heartbroken”. All of which amounts to a prime piece of Americana straight out of North London.

With songs like these, for the most part quiet and reflective, the focus on the words is often greater than with louder, brasher music. Here that means allusions to paintings in ‘Like Turner Studied Clouds’ or Tennyson’s poems in ‘The Lady of Shalott‘ stand out and contrast with more typically generic lyrics like ‘By the River’. In fact studying the lyric sheet that came with the vinyl copy under review highlights all sorts of unusual references. I can’t imagine the word “Frazil”, crops up in many songs other than ‘Last of a String of Tempests’.

Musically points of reference are probably the contemplative, sometime melancholy feel of bands like Cowboy Junkies or Mazzy Star. Diehl’s voice comes across as a mix of Patty Griffin and Over The Rhine’s Karin Bergquist, and has a world-weary quality to it. ‘On Big City, Empty’ the fiddle and electric guitar trip over each other a bit, but otherwise the production, by Nick Harris is quite sparse with mandolin and Julia O’Hanlon’s concertina given space to counterpoint one of the album’s main themes of being adrift. Drums only feature prominently on a few songs which helps with the contemplative feel. The black and white sleeve and lyric sheet insert of the record, pressed in white vinyl, adds to the slightly austere feel of the whole album. The Alvarez Theory have made a record that works well as an album, unusual these days but making for rewarding repeated listening.”

Contemplative, reflective songs from the folk side of Americana