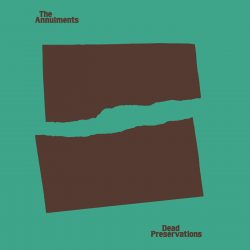 They say you shouldn’t judge a book by its cover and the same goes for albums. The strange, broken abstract design on the cover of ‘Dead Preservations’  the second album from Irish band The Annulments would lead you to believe it’s an album full of angst and existential frustration but the band’s music couldn’t be more gentle and in the main, easy-going and delightful.

Formed by a group of friends studying at University College Dublin, The Annulments musical influences range from Irish traditional to folk to alt-country and beyond. They’re made up of Stephen Coyle who writes all the songs, sings and plays guitar, Claire Fitzgerald (vocals), Richard Gill (bass), Shane Keeling (drums), Nick Cooper (violin and viola), and Peter Moran (keyboards). There are also appearances by Cillian Murphy (saxophone) and Ray Martin (trumpet). The album was superbly produced by Tom Cosgrove at Ailfionn Studios in Dublin.

The album is unusual as the two lead singers, Coyle and Fitzgerald alternate on most of the tracks and they couldn’t be more different in style. Fitzgerald has an old-timey feel to her voice as if she’s just stepped out your radio during a Grand Ole Opry broadcast on WSM whilst Coyle’s voice comes straight out of his luxuriant beard and is infused with peat and Guinness. Most of the tracks feature them alternating on the tracks and the shame is that with their two distinctive voices that they don’t duet more as they do on ‘Another Voice’ or add their harmonies as Fitzgerald does delightfully on ‘Difficult Things’ and ‘Into The Dark’.

There are eleven tracks on ‘Dead Preservations’ and for ten of them, the best way to describe the overall feel is “gentle”. Most of the tracks are mid-tempo and basically acoustic with drummer Keeling playing mostly with brushes and hardly ever picks up his sticks in anger. Cooper’s fiddle combines an Irish folk sound with some Appalachian overtones and there’s also the Americana staples of pedal steel, harmonica and piano.

Coyle’s songs tell of loving and losing, of guilt and alienation, relationships sweet and sour and he sings them with great solemnity and dignity. The lighter songs on the album are sung by Fitzgerald and the stand-outs are the longest track on the album, the slightly old fashioned, ‘Behind The Lines’ with its mellow piano and drums and an excellent, jazzy trumpet solo from Martin, that builds to a splendid climax and another old-timey wireless song, ‘The Calm Before’ that even mentions a song playing on the radio.

The only track on the album that couldn’t be classified as gentle, is the slightly odd and somewhat out of place ‘Animal’ which starts with driving drums and organ. Coyle’s voice is drenched in reverb and the up-beat tempo swings with a Latin rhythm that jars a little coming as it does after eight tender acoustic songs. There’s nothing wrong with the track per se – it just sounds as if it comes from a different album by a different band.

‘Dead Preservations’ is a lovely, very listenable album and the band’s bucolic, folksy, Irish alt-country sound is a delight. The use of two voices that are so diametrically opposite each other as lead vocalists is unusual but on the whole works well and apart from one track, it’s the kind of album to listen to on a warm, summers day whilst chilling with a cold glass of whatever takes your fancy; it’s just a shame about the artwork!