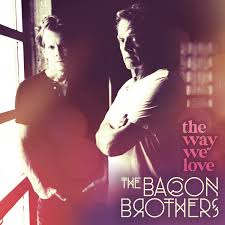 To know that this is album number ten for The Bacon Brothers may come as a surprise to those of us who associate Kevin primarily as an actor. However, alongside Emmy award winning composer and sibling Michael the pair have managed to combine their day jobs with a twenty-year span of hitting the road and the recording studio as a labour of love.

‘The Way We Love’ is a smorgasbord of musical styles, Americana rubbing shoulders with funk, soul, jazz, folk and country. The result is an uneven mix. The brothers have clearly assembled a high-class supporting cast of musicians around them and many of the tracks have a big production feel to them. Opening song ‘British Invasion’ namechecks The Merseybeats, Petula Clark and The Dave Clark Five and includes a shouty, foot stomping chorus that may or may not be an attempt at a working-class British accent. It is a big, bold, brash statement of intent.

Kevin has a more than decent voice and on tracks such as the cringe inducingly titled ‘She-Zee-Zee (Easy On My Eyes)’ and ‘Corona Tune’ he has toned things down a notch and the result is a couple of melodic, acoustic led songs that are as good as anything on the album. These songs have a lovely feel and flow to them, the former enhanced with a great guitar riff and brass accompaniment.

‘Play!’ is out and out funk. Think Starsky and Hutch theme tune, take out the ham acting, replace with a deep groove, big brass and Kevin revealing a Daryll Hall soundalike vocal. While we are playing the ‘soundalike’ game then ‘Momma Pop Culture’ brings us harmonies that would have done The Hollies proud. Like a number of the songs here, it has a retro feel to it and if ‘Play!’  took us back to the dismal 70s then this takes us back another few years.

There are a couple of live recordings on the album and ‘Picker’ takes us even further back in time with guest Tim Quick doing what it says on the tin with a wonderful piece of old-time country. The album closes with ‘Mercy, Mercy, Mercy’, a composition from jazz legend Josef Zawinul that features some brilliant guitar work from guest guitarist Bernie Williams.

That this final track surprises us again with its swerve into jazz sans vocal shouldn’t, by this time, be a surprise at all. The album is a constantly moving feast which, by all accounts, is a Bacon Brothers trademark. Unfortunately, not every change in direction is a wise one. Kevin has gone on record to state that the album is answering some questions about love and, when it moves into slower, love song mode there is a drift towards ‘cheesy’ and, in one track in particular, we are in truly spectacular car crash territory.

That these detract from the good stuff is a real shame as there are some genuine highlights on here. With the caveat that a filter needs to be applied, this is an album with much to commend it.