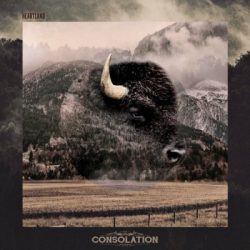 ‘Heartland’ is the second album from the Americana-influenced Danish band, The Consolation. Through regular gigs across Demark and tours in the USA and Canada, along with radio air-time in Denmark, the band are developing a solid identity and a strong following. Led by singer, songwriter, producer and multi-instrumentalist Nis Gaarde, The Consolation reference classic country and rock acts as inspirations, such Waylon Jennings, Johnny Cash, The Band, The Eagles and Petty. This blend of country and classic rock is evident throughout the album.

The opening track, ‘Stampede’, starts with the faint sound of thundering bulls charging before the electric guitar and a heavy drum beat kick in. It’s one of the album’s rockier, immediately arresting songs and the final minute serves as a rolling, stampeding guitar solo. ‘Stampede’ is an explicitly political song that addresses the rise of nationalism masquerading as patriotism, referencing the Constitution, the First Amendment, the national anthem and the American flag and delivering lines like: “Hypocritical right-wing cattle / Trampling all over me.” The message is very clear.

Recent single and title track, ‘Heartland’, comes next. The more uplifting, radio-friendly sound contrasts with lyrics about drifting love. The chorus: “Heartland, heartland, what have we done to you? Your land, my land,” references the famous Woody Guthrie song about his homeland and draws comparisons between the fading love in the verses to social changes and divisions and the growing gap between the country and city in modern America. Gaarde’s vocal melody is warm and catchy, quickly sounding familiar. ‘Mary Sue’ follows, with an upbeat groove and a strong country feel, musically, vocally and in the lyrical narrative. There are multiple, conscious references to America, from the: “…ride to Mexico / Cross the River Grande,” to the: “…run-down movie hall / Rockford, Illinois.”

The album continues to offer a balance of classic-rock tinged tracks, such as ‘White Jackalope’ and ‘The Long Game’, and songs with a clear country influence, including two of the album’s highlights: ‘Vengeance Song’ and ‘Tennessee Chair’. The former is a slower, more acoustic number with a well-crafted guitar solo leading into and following the final verse, sounding very much like the ‘lonesome journey’ described in the song. The repetition of: “This time it’s personal,” draws the listener in. ‘Tennessee Chair’ is a straight-forward country narrative about the electric chair, effectively told through the idea of a farewell letter to the narrator’s girl, having made peace with his crimes.

‘Heartland’ benefits from the successful blending of rock and country styles and the good use of a range of instruments, including banjo and pedal steel. However, The Consolation’s real strength is Nis Gaarde’s deep, warm, country-toned voice, which feels immediately familiar and authentic. Throughout the album, the lyrics and inspiration are self-consciously American, such as the image of nationalists wrapped in the flag, the electric chair and the homecoming queen. Perhaps the band’s journey will see more of a Danish influence in future releases to further develop their distinctive sound.