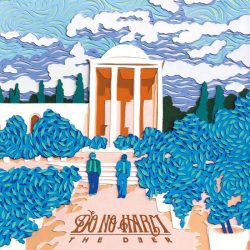 The Deer are a five-piece band from Austin, TX. They describe themselves as ‘indie folk’, which is slightly disingenuous, because on this evidence they offer far more than that rather limiting label might suggest. Sure, there are elements of folk in their sound (the instrumentation includes fiddle and mandolin), but they also use synthesizers and on balance they are more likely to appeal to those approaching them from the direction of thoughtful, intelligent and literate American rock. The most obvious reference point is Mazzy Star, but The Deer are in no way derivative; quite the opposite in fact, their sound is genuinely unique and distinctive.

Album opener ‘Confetti to the Hurricane’ is founded on a tense bass line, over which are layered gently swirling melodies interwoven with concise guitar breaks and great hooks. Band founder and singer Grace Rowland’s mesmerising, siren like vocals fit perfectly with the band’s dynamic. The song itself, is one of the more upbeat tracks on the album and a clear highlight. What follows, doesn’t always reach the same heights but is always compelling and interesting. ‘Swoon’ and the instrumental ‘Interstellar Frontier’ are the two tracks that lean most heavily on the ‘folk’ element to their sound (despite the latter’s title suggesting that it might have been a long lost Hawkwind track!) The folk element is also present, but less upfront, in other songs as well. However, by no stretch of the imagination is this a ‘folk’ album. Other album highlights illustrate the point. ‘Chill Veil’ has a trippy, psychedelic feel to it and ‘How Not to Die’  is a piano ballad, albeit one also adorned with exuberant but fitting instrumentation. Other songs have a slower, atmospheric feel to them.

‘Do No Harm’ is The Deer’s fourth album. This is unsurprising; the music has a maturity and versatility that takes time to evolve. Equally, it also has the spark and originality that suggests a band in its creative prime. The Deer are probably at the outer fringes of Americana, if indeed, they sit under that umbrella at all. Nevertheless, ‘Do No Harm’ is a great album. The fact that it is genre-fluid and difficult to categorize should be read as a compliment. The album is too big to fit in a single box and therefore best left to be enjoyed by all, on its own considerable merits.

About Clint West 133 Articles
From buying my first record aged 10 and attending my first gig at 14, music has been a lifelong obsession. A proud native of Suffolk, I have lived in and around Manchester for the best part of 30 years. My idea of a perfect day would be a new record arriving in the post in the morning, watching Ipswich Town win in the afternoon followed by a gig and a pint with my mates at night,