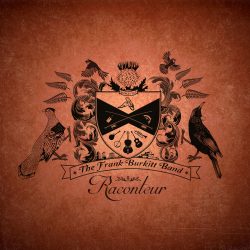 A Scot, making Americana music out of New Zealand – and making a fine job of it too! It says much for this genre of music that it can take a lot of diverse influences and still retain its core sound and appeal. In 2014 Burkitt and his partner, Kara Filbey, relocated from Edinburgh, Scotland to Wellington, New Zealand, where the Frank Burkitt band was formed, adding double bass player James Geluk and mandolin and banjo player Cameron Burnell to Frank’s vocals and guitar and Kara’s flute.

It’s an unconventional line-up but one that really does justice to Frank Burkitt’s songs. Burkitt’s writing style leans quite heavily on folk and folk blues but he also recognises the contribution that jazz and swing can bring to his songs. On tracks like ‘Paint The Town’ and ‘Gypsy Barber’ that jazz influence really shows through and you get music that nods towards the likes of Pokey Lafarge or, in lighter moments, a country-tinged Pentangle. ‘Gypsy Barber’ is particularly notable for some fine clarinet playing, presumably from Ms Filbey and some nice tongue in cheek lyrics, built around a visit to a travelling barber that gave Burkitt and Burnell particularly bad haircuts – “Well he’s been known to cure disease and broker peace in the Middle East. His short back and sides will hold back the tide. Just a trim, well there’s no such thing!”. It’s a fun track in the best traditions of country swing.

The album kicks off with a strong country blues track, ‘Work So Hard’ that highlights Burkitt’s strong story telling skills – “On a night like any other in a barroom where the flies hover, in you walked all tattered and weary. Riffed up hat on, old suitcase that you sat on, I had no choice you were talking to me”, sets the scene beautifully. The album ends equally strongly with the a cappella ‘My Heart Waits’, a beautiful building piece of unaccompanied singing that wouldn’t be out of place in either the most traditional of folk clubs or the most contemporary; this track also highlights the fact that Burkitt isn’t the only one in the band with a great voice.

In between these book ends you have an album of genuinely good songs delivered by a fine sounding bunch of musicians. Frank Burkitt is possessed of a very good tenor voice that drives these sparsely arranged songs along beautifully – and credit really does need to go to those arrangements, completed by the band themselves, because the “less is more” approach is perfectly judged for this collection of songs. Similarly, producer Gerry Paul, who has previously worked with the likes of Tim O’Brien and The Staves, has balanced the album so well, allowing Burkitt’s voice and all the featured instruments to stand out; a wonderfully clean sounding album.

This is, quite simply, a good album of well written and played songs. Sometimes the simple approach pays dividends.

The simple approach pays off