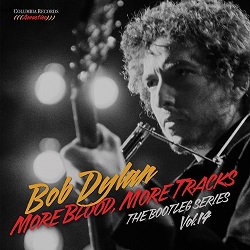 “Every one of them words rang true and glowed like burning coal, pouring off of every page like it was written in my soul” – ‘Blood on the Tracks‘ is arguably Dylan’s masterpiece in a gallery of great works. What this entry into the Bootleg series – again, arguably the most important on-going archival series by any artist – offers is an alternative ‘Blood on the Tracks’, the version of the album that Dylan first recorded when he took these songs into the studio with a very different record in mind. September 16th-19th 1974 saw Dylan in the A&R studios in New York cutting tracks that had been stripped back to their essence – guitar and harmonica, Dylan’s words and voice – there was “revolution in the air“.

It’s not all here – not track by track every nuanced take, that’s what the deluxe edition of Bootleg Series 14 is for. What is here is, and yes, arguably again – we do love to argue – the best takes of each song put together in a modified running order creating something pretty close to what Dylan had originally been thinking of.

‘Blood on the Tracks‘ is, simplistically, Dylan’s divorce album, although there are plenty of other interpretations available – but the sense of an ending, or a relationship falling apart and of a desperate longing that that should not be happening is a common lyrical theme. ‘If you see her, say hello‘ has Dylan salving his ego – “she might think that I’ve forgotten her, don’t tell her it ain’t so” – and this recording of the song is aching in its honesty. Not bad for the first take of the song – and not bad for the first take of the four day recording session.

‘Tangled up in Blue‘ retains its position as the album opener, but it’s a very different song from the final released version. Not just in the playing and Dylan’s phrasing, but the words, the viewpoints and perhaps most importantly the identification of characters – what would later be “I” is here “he“, it changes everything. Is Dylan cagily standing back from himself? That seems logical, and his scathing dissection of a couple torn asunder takes on new meaning here as he observes himself from a distance and then takes ownership of his own emotions “He was always in a hurry / too busy or too stoned / and everything that she ever planned just had to be postponed / he thought they were successful / she thought they were blessed / with objects and material things / but I never was impressed / And when it all came crashing down / I became withdrawn“. Who was writing like this? Who is now? And this is a verse destined to be completely rewritten.

What is most astonishing about this release is how songs so well known can be reshaped so dramatically and it’s not at all jarring. ‘Lily, Rosemary and the Jack of Hearts‘ is taken at a leisurely pace, running to almost ten minutes, but this folk ballad approach perfectly fits the song. ‘Shelter from the storm‘ has Dylan’s vocal strikingly clear, something clacks against his guitar, and yet this adds a sort of natural percussive rhythm. Even in the poetry of ‘Idiot Wind’, with it’s detailed drawing of intense moments “You close your eyes and part your lips and slip your fingers from your glove. You can have the best there is but it’s gonna cost you all your love. You won’t get it for money” is also the harshest of dismissals, there’s a softening which acknowledges that both parties in the dispute are idiots, but here there’s also the combination of ‘You’re gonna make me lonesome when you go‘ and the addition to the album of ‘Up to me‘ to build on this. The first reflecting on all the good times there had been, and the second reflecting on the loss, and taking responsibility for the need to be moving on. It rounds the album out beautifully, and gives a different feel to having ‘Buckets of Rain‘ as the closer. ‘Buckets of rain‘ had the feel of false jollity after a gruelling time, ‘Up to Me‘ has an adult acceptance of things that can’t be changed. Both, in their own ways, cap their albums perfectly – it just goes to emphasise that the album we know could so easily have been so different – and no worse for the changes.

So ultimately it’s as if we’ve thrown the I Ching and found ourselves in a Philip K. Dick alternative reality – everything’s much the same, but, hey, isn’t everything very different? In this case, though, there’s nothing sinister – in this world, this ‘Blood on the Tracks‘ is as monumentally impressive as the ‘Blood on the Tracks‘ we’ve clung to for almost 45 years. Dylan is no less powerful on a bare acoustic album, his poetry is no less dazzling – rock, if you like to call it that, had never seen anything quite like this before, and there’s been precious little comparable to it in the years that have followed. Even if you’re familiar with many of these versions of the songs from “proper” Bootleg albums like ‘Joaquin Antique‘ then this release has value – it’s cleaned up, it’s had the tape speed corrected, it sounds like Dylan’s singing right at you.