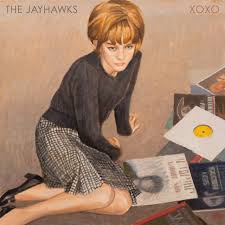 For many people The Jayhawks were one of the initial gateway drugs to the Americana and alt-country scene particularly with their 1992 classic ‘Hollywood Town Hall‘ with its chiming guitars, extraordinary harmonies and classic songwriting and as time and events have reshaped them and the personnel they have still retained not only their originality but also their identity. This is a proper band with proper tunes and a back catalogue to die for. And a sound! No one sounds like the Jayhawks – think about it. Just like no one sounds like Tom Waits – it is or it isn’t  – simple as that.

So where does ‘XOXO’ stand in the canon? Just listen to the first few bars and you’ll know that it stands up very well indeed. Things have changed but not that much and that is no bad thing!

‘This Forgotten Town’ a Perlman/ Louris composition starts with acoustic guitar, Gary Louris’s careworn voice, sparkling piano, a chorus to die for and suddenly you are in classic Jayhawks track complete with a fuzzed guitar break and beautiful coda that should last twice as long. Gorgeous. For the seasoned ‘hawks follower the significance of Tim O’Reagan sharing the lead vocals with Gary Louris is not lost. Here is an album where control has been loosened by Louris and the band members have had a riot with their contributions. There has always been collaboration but Louris’s songwriting has always been so strong that material has always been fed through his filter but Tim O’Reagan, Karen Grotberg and Marc Perlman all have contributed very strong material here and it pays off in spades.

The album unfolds beautifully after the opener. ‘Dogtown Days’ is an O’Reagan rocker that has the brio of ‘Tailspin’ from ‘Rainy Day Music’; ‘Living in a Bubble’ is all Beatles and Harry Nilsson with its joyful piano motif; ‘Ruby’ is a Grotberg ballad both affecting and reflective, a simple piano-led piece that speaks of early Rickie Lee Jones or mid-70s Fleetwood Mac with its 70s arrangements; ‘Homecoming’ harks back to the arrangements of ‘Smile’ era Jayhawks with its chiming chord progressions. ‘Society Pages’ is another O’Reagan composition all indie rock and charming in its apparent vitality; ‘Illuminate’ is a co-write by all three male members of the band, a delicate and shimmering examination of idolatry and self-expression that builds and builds until the gorgeous conclusion. And that just side one!

And so side two unfolds the same way, each track as strong as the last. ‘Across My Field’ another hazy, dreamy Grotberg joy, her piano even more staking its claim to be as much of the Jayhawks sound as the guitar and harmony. The Perlman ‘Down to Farm’ a waltz-time highlight that wouldn’t be out of place on a Simon and Garfunkel LP! The album finishes with O’Reagan’s delicate and hymnal ‘Looking Up Your Number’ which compares more than favourably to O’Reagan’s previous classic ‘Tampa to Tulsa’

This is a smashing album. It will satisfy the long term fans and could equally introduce a new fan to a catalogue of great delights. There are no laurels rested on here, in fact, there’s some real raising of the game. Highly, highly recommended.