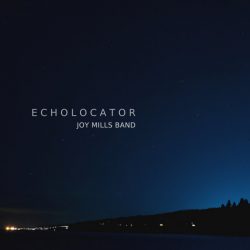 Hailing from Seattle and now five albums in comes The Joy Mills Band. Their latest record, taking a sonic leap from their country and roots territory now includes influences such as Supertramp and The Police. An eclectic mix of long-term friends brings ten brand new songs into fruition with ‘Echolocator’, released on the 24th of January via their own independent outlet.

Mills and the band gather pace with the opening track ‘Echolocator’, setting the tone for the entire album in terms of production and the backdrop of the driven rhythm section. Here comparisons could be drawn to later Fleetwood Mac records, bringing on an almost 80’s revival. Along similar lines ‘Get Out of Town’ illustrates how well Mills’ voice transcends across the music, accompanying the strength of the melody.

‘Favourite Stone’ is another stand out track, bringing contrasting tonalities of funk and rock, as does ‘My One and Only’. Here we see a little more instrumental prominence as the song uncovers the textural playing of Lucien LaMotte on pedal steel and Jack Quick on keys.

The album can sound a little mechanical and the accompanying rhythm section repeats itself across a handful of songs but perhaps it is not an album for die-hard instrumentalists but for those looking for a crossover to 80’s pop sensibilities.