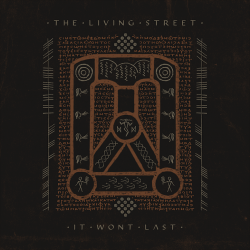 If you only heard ‘Home On The Road’ the first track off The Living Street’s second album ‘It Won’t Last’ you might think you were about to hear the last great summer album of the year before autumn takes a firm grip. With its banjo, acoustic guitars and a little bit of what sounds like a penny whistle, you’d be yearning for some sun whilst warming yourself to the band’s delightful harmonies. However, the rest of the album doesn’t really live up to the opening track and the other eight songs disappoint a little in comparison.

It’s an eclectic album with the almost pop-like ‘Mean The Most’, the blue-eyed soul of the possibly Hall & Oates influenced ‘Two Dark Hours’, the indie-rock guitars of ‘Don’t Be Afraid’, some country rock on ‘Pick Me Up’ and even a power ballad in ‘Slowly’.

Based in Pittsburgh PA, The Living Street style themselves as a folk-rock duo (they’re Edward J Angelo and Nick Guckert) and whilst there is some folk-rock on a track like ‘Hey Babe’, overall the album is a bit of this and a bit of that without really ever settling into a cohesive style.

The lead vocals from Guckert are reminiscent of Michael David Rosenberg (aka Passenger) with a high, slightly nasal tone which is easy to listen to. What really stands out though are the band’s harmonies with Angelo’s voice meshing perfectly with Guckert’s. The two are lifelong friends and they obviously know each other’s voices so well that the harmonies come naturally and they’re the highlight of this very well produced sophomore album.

If the band can re-create their superb harmonies live on stage, they’ll be worth catching in a bar somewhere in Pittsburgh (or elsewhere) and the merch stand will probably do great business with ‘It Won’t Last’ which is a fine album – it’s just not a great one.