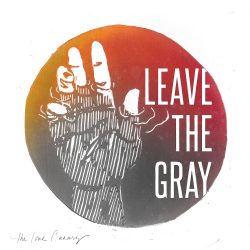 ‘Leave the Gray’ is the second album from Jesse Fox and Heather Camacho, known together as The Lone Canary. Throughout, there is a common theme of loss, which is frequently, intensely emotional. Another thread running through the album is the use of strings and other well-chosen instruments to create lovely layers of sound, helped by the clean, clear, fresh production. Fox and Camacho’s effortless vocals blend beautifully when they harmonise together, though this is not overdone and they often take turns to sing, providing backing for one another.

This variety, along with the sweet melodies, helps to sustain the listener’s engagement across a remarkably consistent album.

The album opens with an atmospheric ballad, ‘Mourning Song’, featuring entwining vocals, a slowly rising string solo and a smart lyrical narrative that circles around from sadness and parting to hope: “I’ll hold you, some bright morning.” The tip toe piano on the follow-up, ‘Out of Time’, creates a delicate rhythm that carries us through a song that is genuinely moving, both lyrically and musically. Each verse brings a short story of loss, handled with intelligent sensitivity. ‘Made to Sink’ is set apart from the previous songs by a subtle increase in pace and use of percussion. It builds into a gently more upbeat song, musically, which contrasts with lyrics that are full of doubt: “I’d sell my soul to skirt failure but I can’t find a taker.” ‘Ride’ continues the faster, lighter pace and benefits from really smart songcraft, particularly the use of the different singers to create and support the song’s meaning, Heather Camacho offering hope and escape and, in the end, they sing, and ride into the night, together.

The album continues to deliver melodic, well-written songs. The title track is memorable for the tense chorus and drums and the electric guitar solo, which sets it apart from the instrumentation on other songs; it’s another song of escape and renewal, though this time there is a sense of actually making that step. ‘The Reaper’ is a lovely, if sinister, lullaby that contrasts well with the feathery, gently rhythmic ‘The Silence’, on which the delicate sound is set against a lyrical toughness. On ‘Hold On To Me’ there is a need for connection and a sense of being lost, “These shores bear tracks of a soul gone missing,” but then found as the instrumentation builds and repetition reinforces a rising hope.

The songs are sequenced thoughtfully, fitting together well, complementing one another, growing out of one another. There is a fluidity and individual songs don’t necessarily stand out as highlights, which is meant in the best possible way; there is no filler and each song earns its place. While retaining the album’s identity, there is just enough variety – subtle but distinct – in terms of pace, percussion, vocal lead and tone. The Lone Canary’s tasteful tales of love and loss feature consistently beautiful song-writing and smartly crafted lyrics that achieve the desired emotional impact. The songs are rooted in a traditional folk foundation but it never feels old or outdated; in fact, the album, production and instrumental choices feel fresh. ‘Leave the Gray’ is a coherent whole, held together by the duo’s haunting voices and musicianship. This is an album to sit back and absorb in its entirety.

Absorbing and melodic folk, with beautiful harmonies and songcraft