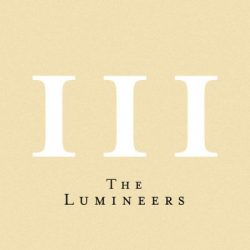 If you only give the new album ‘III’ by The Lumineers a surface listen, you’ll probably find yourself thinking something along the lines of: “well isn’t that nice, there’s a new Lumineers album”. And on that surface level, you’ll be right. As background music – there’s nothing new here. But there are two points to make following that observation. First, why would you change anything up when you’ve found something that works for you and your fans? Second, the best of what’s on offer in The Lumineers’ music lies beneath the surface.

The thirteen tracks on their new album will treat your ears right if you stay on the surface but the good stuff further in deserves a deeper dive.

Wesley Schultz’s songwriting is always worth a few moments of your time. He renders the details of the commonplace in stark detail, telling the tales of moments large and small with the same contrast as a Mapplethorpe portrait. Schultz and Jeremiah Fraites arrange songs with an impressive balance of cinematic vibrancy and disaffected distance that has come to define the band’s sound. The music is easy to listen to and, as always, almost too good at balancing pop appeal with hipster feel. But the music is still just the invitation into the scenes, snapshots, and sonnets that Schultz renders in song.

Sure, they’ll make you tap your toes but—if you let them in, they’ll deliver more.

Sometimes more of the same can be a pretty good thing