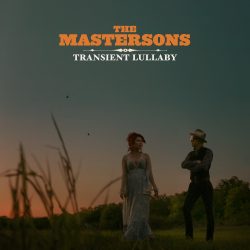 Married couple Chris Masterson and Eleanor Whitmore, the Texan voices and pens of The Mastersons, have spent a lot of their time in recent years as part of Steve Earle’s touring band The Dukes. They even double up as Earle’s opening act. This is their third album in five years. Clearly they’re busy people! For the most part Transient Lullaby is a gentle, introspective blend of country/pop-rock.

Guided by Chris and Eleanor’s watertight harmonies, the music is easy on the gas and kind to the ear. There are echoes of Nicks/Buckingham era Fleetwood Mac in the blend of the two voices (but that may just be in this reviewer’s fevered mind). The arrangements employ the country familiarity of pedal steel and mandolin whilst adding a more grown up pop sensibility, accentuated by the odd flourish of countrypolitan strings and Hammond organ. This Isn’t How it Was Supposed To Go is an excellent track – it’s perhaps the most ‘country’ song on the record; a slow sad dance of realisation with a sweet fiddle solo amidst the Patsy Cline-esque melody. It’s hard to pick out any real standouts though; the record has an overall vibe set by opener Perfect that recounts love’s often troubled course. Fight has, err, a bit more fight to it – it’s probably the gutsiest track on the record, without ever quite reaching anger or fervour. All in all, if you prefer your Americana smooth rather than crunchy, then The Mastersons are well worth exploring.