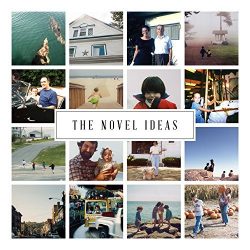 The Novel Ideas are a country-folk four-piece from Brighton, Massachusetts and their self-titled album was released in the UK in November. Having been playing together for around six years and featuring three different song-writers in their ranks, the Novel Ideas certainly don’t lack experience or creativity and it shows in a mature album that demonstrates all that is good about the Americana genre.

The hallmark of a rich and varied set of songs is the well-honed four-part harmonies that, set alongside sympathetic production by Rich Parker of Lord Huron, enable songs of loss and heartache to breathe. The fiddle playing of Eva Walsh adds further depth to songs such as I’ll Try and Farm and combined with subtle pedal steel of Danny Hoshina we have a sound to be reckoned with.

As mentioned, the vocal harmonies are a strength to ‘The Novel Ideas’, but individual vocals stand out too, particularly striking is the voice of Sarah Grella on I’m Not Waiting and the poignant I Was Not Around. All in all, a fine album that will certainly leave you wanting more.