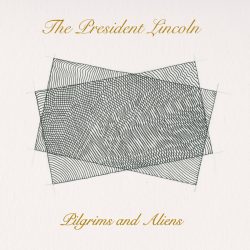 The Gaffer generally, and understandably, prefers reviews to not be written in first person. I suppose the prospect of being even partly responsible for unearthing another Everett True would actually be a burden too heavy for even the shoulders of the broadest human, but this review is contingent on me being able to say this. I don’t like Placebo star Brian Molko’s voice. Don’t know a thing about him, could well be a good egg so good luck and all the rest of it to him. But that voice. No. So you see, I can’t make these observations the site’s observation.

But the thing of it is, The President Lincoln singer and songwriting guitarist Alex Maws, sounds a lot like Brian Molko. Not all the time, but enough to make me wince a little when I thought to listen to it a second time. Then my phone died and with it Bluetooth, leaving only CDs already in the car as my First World Problem. I had one CD. This one. Multiple plays later, and I‘m cogitating on how ephemeral music has become, that if I hadn’t specifically been asked by someone to listen to this with a view to telling other people about it, I probably wouldn’t have played it again, you know? There’s always something else to listen to.

So I did, many times. Erudite, articulate, ostensibly indie rock that is deceptively, and difficult to pinpoint, odd. An oddness that reveals itself more with every listen, even while being largely instant and though difficult to pigeonhole with any useless accuracy, REM are in there somewhere, the band occasionally letting their influences show. While with familiarity, Maws’ voice takes on a Michael Stipe-ness quality, not in its tone or timber, but in his phrasing and delivery. Musically, whether rocking, like on opener and manifesto-like “An Attack On My Art Is An Attack On Progress” and title track, or the reassuringly wintry melancholy of “Next Year In Brooklyn” or the sublime “Home Port Plotted”, the band don‘t doubt themselves for a second, supporting Maws’ anxiety, as “In Always the Quiet Ones” to superb effect.

Ultimately then, The President Lincoln have made an album that’s a little bit folk-y, a little bit indie, a touch arty, a lot wordy, with a seam of REM and an easily misunderstood first impression, but also odd and meticulously crafted enough that for the first time in a long time, the words president and fine can appear in the same sentence without seeming weird. The President Lincoln have made a fine album.

A timely reminder that not all presidents are half wits.