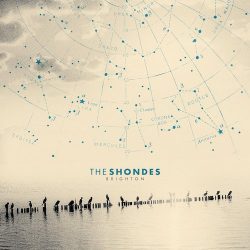 s the fifth full length album from this four piece Brooklyn based band the core of which is formed around best friends Louisa Rachel Solomon and Elijah Oberman. Having been in existence since 2006 they have become known for their energetic performances and political activism including forthright views on Jewish issues. The opening track “Everything Good” is an uplifting driving love song which introduces us to the clear and strident voice of lead singer Louisa Rachel Solomon and also the soaring violin of Elijah Oberman. The pace continues with “True North” where we get the first hint of the band’s political side with the chorus – “next year in Jerusalem we say every day is revolution” set to a really catchy pop tune. Produced by Tony Maimone of They Might Be Giants fame, the album has a punk feel (albeit the US version) that would not be out of place in 1977, that is heavy on the bass and attitude especially “Wrong Kind” which is a fantastic Ramones like track as is “Unstill Ones”. However, to the great benefit of the album there is a good range of styles as witnessed by the enveloping warmness in “Holding Out”.

If you like your music electric with a bit of retro punk and a hint of The Vaccinnes thrown in for good measure then the chances are that you will like this energetic and original CD.