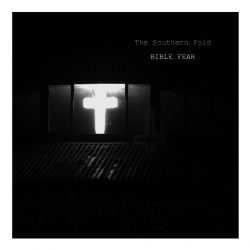 If the artwork and name of Irish group The Southern Fold’s debut album doesn’t give you enough of a clue as to its prominent theme, then the titles of the songs surely will: ‘Blood of Life’, ‘Sunday Best’, ‘Jesus Christ and the Holy Ghost (Not Taken in Vain)’ and ‘The Devil in Me’ are just a few of the thirteen largely religiously-themed tracks.

“Cold iron lives in your stare / It’s unnerving the way you hold fear and mystery,” founding band member Emlyn Holden harmonises with co-lead singer Laura Hand on the opening track ‘Hold Back the Sun’. “Stirring the truth with a cup of his blood / And the lie that you sold deep in misery / So hold back the sun / Let the rain fall down / Dim the light shining love and divinity,” they continue damningly. While the track starts with soft acoustic harmonies, it’s not long until the beat kicks in and by the end of it it’s rockier than the folk tone we started with. Holden has mentioned being influenced by the late-Nirvana frontman Kurt Cobain (the band even covered ‘Where Did You Sleep Last Night’ – famously also performed by Nirvana during their legendary MTV Unplugged set – on their first EP), and towards the end of this song especially there are obvious vocal similarities between the two.

‘Blood of Life’ brings us back to the folk and blues tones we’re more likely to expect. Lyrics like, “Red river flowing with the struggle and greed / The power in the hands of the few that lead / Driven by desire in spite of the need / Raping the earth with an evil seed,” couldn’t feel much more timely. ‘Save Your Soul’ is an album highlight, the sombre tone and words (“You’ll never feel self-satisfied / Until you burn deep in the pyre / And the fire below its flames burn high / As the angels fall where the demons rise”) fitting in perfectly with the vocals; it’s especially nice to hear Hand get some of the song to showcase her voice alone. The only song which we get to hear the underutilised Hand front and centre for the whole track is ‘No-One is My Name’, which is a refreshing change that the record could have benefited from more of.

‘Sunday Best’ is another highlight for its complexly simple lyrics, with “Dress me in my Sunday best / Laid in lace and pine / Send me to this empty space / and lose me in the fire,” surely being the best opening lines of the album. ‘Dead (Un)Forgiven’ runs long at over nine minutes in length, starting out fairly conventionally in structure but them morphing into something more sprawling.  ‘Run On (For A Long Time)’ sees the band change tone a bit and give an energetic rock ‘n’ roll spin on the classic, most famously covered in recent years by Johnny Cash.

‘God is a Ghost’ is a good album closer. We finish with a harmony-rich words, “With a soul full of living and a heart full of life,” which offer a nice touch of hopefulness to this album that observes and dissects that institutions that surround faith.

Although Holden has said the focus of religion as the overlying subject matter was unintentional, it makes for an interesting collection that acts as a concept album of sorts. The weakness of this album is at thirteen tracks, it can feel repetitive at times, something using Hand for more lead vocals might have eased. Still, with well-structured songs and well thought through lyrics, ‘Bible Fear’ is a strong debut for this Irish group who wear their country and folk influences with pride.

A well accomplished first album showing promise for the future