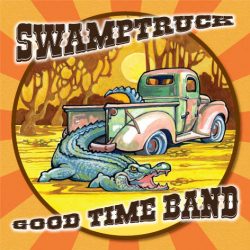 This is the debut album from an established group of five musicians, based in Cambridge UK, well known at local festivals, and at The Cambridge Festival itself. They are much revered locally. ‘Good Time Band,’ the first track, sets the scene well and establishes the band’s appeal to an audience. As Alasdair Taylor sings, “It must have been the moonshine!” and his harmonica, backed by Graham Spink’s banjo, all capture the appeal of Swamptruck immediately.

‘American Skies’ confirms this provenance by parading proudly a song that sounds purely American. Written by Jono Buckenmyer and featuring, at the bridge, his guitar. Here is a number that dreams of the deserts, Arizona, and living “under the American sky.” The third track, ‘Sure Hope My Soul,’ an uptempo number, echoes with musical clarity, and the hope that one can find “a place that I can breathe in.” Thus the appeal of this good time band builds up. Obviously the production, by Tom Bainbridge at White Lion Studios, Hadddenham, just West of Ely, has worked well, capturing perfectly the music of a local gig.

‘Pretty Lonesome Me’ has notable harmonica playing from Alasdair, while ‘I Seen Her First,’ a fast song, continues with the harmonica, but “with the figure of a do-si-do/ Hanging around to the sound of the old banjo.” All the tracks then, hold that hoe down feeling. This is noticeable too in in the rocking track ‘Finding Me’: “I got corn mama/ Callin’ to me/ Just a moment, I’m feelin’ free!” Thus the song, “hurrying thru” with all the band fully contributing, with Alasdair singing, backed by harmonica, guitars, banjo, bass, and percussion, where ”She’s still calling out for me” and the “bead-stones wash over me!” This is tight, efficient musicianship, totally absorbing.

Watch out for ‘Gonna Get Late’ or a word that rhymes with that. Fast and furious; “1,2,3, shots of whiskey, looking for love.” And track 9, ‘Hard Times’ has the positive message, that despite “hard times by the setting sun/ We’ll take it to the limits while the wheels still spun.” And watch out for the harmonica bridge here. The last track, ‘Wondering’ is a sad song, missing “The Sweetest girl around.” Alistair’s voice here is moving, conveying the “sweetest” memory, and wondering “what you’re doing now” while the harmonica drifts softly into the ending.

Here is live toe-tapping English Americana of the highest quality