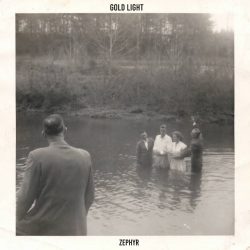 Joe Chang, aka Gold Light, has been releasing music since 2013 from the Blue Ridge Mountains of North Carolina. ‘Zephyr‘, his fourth album, was all written, performed and mixed by Chang himself and recorded over just three days on a 4-track cassette player, in his bedroom. The fact this was all accomplished in his bedroom might make one think he is young and inexperienced, but that is far from the case.

Chang tells many deeply emotional stories through his songs. The opening track ‘Cannon Street‘ is a five and a half minute epic and a tragic tale portrayed with great emotion and drawing on considerable maturity. A little less synth and more instrumental purity might have perpetuated the sincerity, though. But, and quite disappointingly, synthesised strings and keys are used heavily throughout the album.

Chang’s music crosses many genres, and there are some potentially beautiful songs on this album. Still, they could do with being a bit less derivative. Comparison to The Boss can’t fail to be made, and this is possibly where Chang needs to have a re-think. His narrative approach, the tone and style of the harmonica and even some of the lyrics could be straight from Springsteen himself. Unfortunately, while that could be a compliment, in this case, it actually means the songs lack authenticity.

‘Blood‘ and ‘Riverbed‘ could and should be immense songs if only they didn’t emanate such Springsteenesque style and, again, the overdose of synths detracts from rather than enhances the emotiveness.

It seems a line in the song ‘Blood‘ might give away Chang’s age. At 36 maybe he should have the experience and capability to be more pioneering in both his sound and delivery. The Boss and his legacy are going to be around for a long time yet, so carving his own path is going to be essential for Chang’s personal longevity.

It’s a shame as this album has such promise. The essential ingredients: talent, lyrics, vocals, musicianship are all there in spades. So, it would be tremendous to hear it again after perhaps bringing in an experienced producer who could hone it into a more unique body of work.