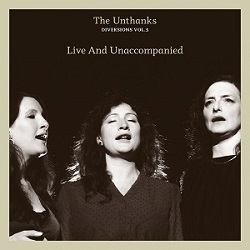 The Unthank sisters – Rachel and Becky – have become a significant presence on the English folk scene over the last fifteen years releasing albums in various band combinations; their latest release in the ‘Diversions’ series sees them temporarily drop their band and put together a series of live recordings with only the addition of Niopha Keegan as a third harmonising voice. The majority of the songs on the new album have not been previously recorded by The Unthanks, so it isn’t the case that ‘Live & Unaccompanied‘ is just a quick fill-in live album, in fact The Unthanks have gone so far as to suggest that these are their definitive recordings, since these songs are best represented in the live arena. Well, perhaps, but since there mostly isn’t a studio recording to compare them to that argument gets pretty circular pretty quickly.

Naturally ‘Diversions Vol.5 Live & Unaccompanied‘ includes plenty of traditional song, with a strong showing from their own Tyneside roots. The mournful ‘I’m Weary of Lying Alone‘ has Niopha Keegan taking the lead on a song of longing, with the fear that “the flower it will fade, and also the maid if she lies any longer alone“. All would seem to come well as this tale of woe is followed by the jolly ‘Geordie Wedding Set‘ which moves from ‘We’ll Aal Be Wed In Our Auld Claiths‘ which is fast-paced enough to be a skipping song to the boisterous ‘Hi Canny Man‘. Perhaps, though, things are not as fine as they may seem as this passage from longing for love to marriage is then capped by the traditional sounding ‘The Griesly Bride‘ which takes a step into the supernatural as a bride runs barefoot from her husband who follows her through the snow but finds she has met with a companion who leaves tracks that “were never of human feet.” His bride is gone, and pursuer becomes the pursued – before finally coming himself to a grisly end.

There’s plenty more that’s not traditional as well, ‘Bees‘ for example is a combination of Connie Converse’s ‘Honeybee‘ and Peter Bellamy’s setting of Kipling’s ‘The Bee Boy Song‘ which neatly illustrates the range of that Unthank sound – ‘Honeybee‘ is a little love song with a fifties girl group three-part harmony feel whilst Kipling’s words are fitted to a darker tone full of mystery and foreboding. That same dark light is shone on another of Connie Converse’s composition ‘One by One‘ which walks a far more ominous path “we go walking out at night / with the grass so dark and tall / we are lost past recall / but the moon is down.” – it brings to mind the mysterious nocturnal excursions of Shirley Jackson’s Elizabeth/Beth/ Betsy/ Lizzy (and maybe others) of ‘The Birds Nest‘. Probably the finest song in the collection is one that The Unthanks have recorded before – Davey Dodds’ ‘Magpie‘ which has flown a long way from its prog/folkrock origin with Red Jasper to be a chilling rolling together of various magpie superstitions which in this retelling is drenched deep in the spirit of ‘Wickerman‘ weird-folk.  Always at their finest when they are both dark and weird, ‘Diversions Vol.5 Live & Unaccompanied‘ offers much in that way to admire and enjoy from The Unthanks.