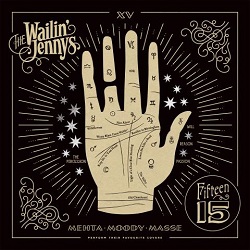 Six years after their last album The Wailin’ Jennys (Nicky Mehta, Ruth Moody, & Heather Masse) reconvened for a five day recording session. The title? Well – it’s fifteen years since the original trio (Carla Luft had the gig before Heather Masse) got together for a one-off show in a Winnipeg guitar shop. Once they realised just how well their voices blended in gorgeous three part harmonies it made more sense to carry on performing together – a decision that led on to two Juno awards and a clutch of well received albums. Fifteen reflects the busy lives of the three women – rather than try and come up with an album’s worth of newly penned material the decision was made to capture some of the covers that they’ve woven into their live sets. Which has led to an album of diverse song beautifully stitched together by those gorgeous vocals – it’s not often that Warren Zevon, Tom Petty, Hank Williams and Dolly Parton turn up side by side, but on Fifteen they seem natural stable mates.

The arrangements for the most part could be called bluegrass influenced, although the achingly lovely Keep Me in Your Heart has a more folky feel, carried by a discrete string section. There’s more than a little touch of acapella gospel to Hank’s Weary Blues from Waitin’, which just cries out for a Coen brothers film to come and wrap it up. There’s more gospel on the album opener, the traditional The Old Churchyard which floats effortlessly over a single fiddle drone which adds a spectral touch to this song of future joy in heaven. There’s a different kind of spirituality to Dolly’s Light of a Clear Blue Morning – new beginnings coming with the new day, a reborn optimism for the future with the newborn sun. Which sums up Fifteen nicely – a collection of songs with an optimistic core and a stunning series of vocal intertwinings. Which is The Wailin’ Jennys doing what they do.