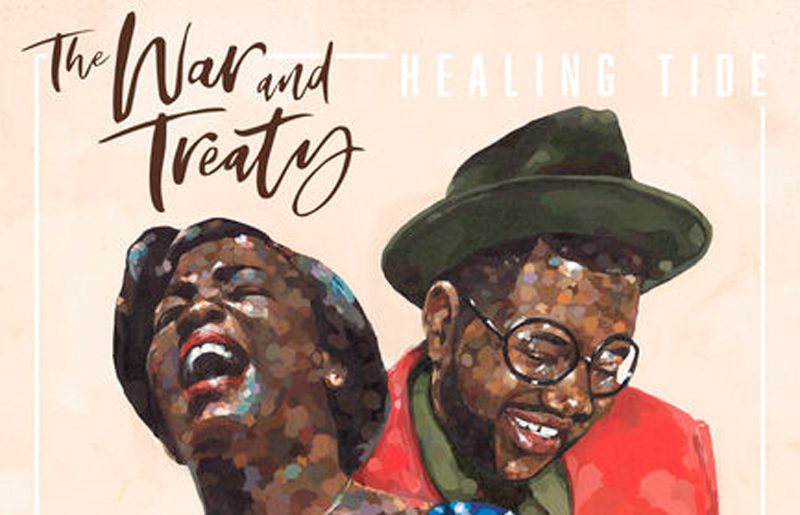 Hidden under the East Stand of Stamford Bridge stadium, the home of Chelsea Football Club, is Under the Bridge, a music venue that rivals the very best that London has to offer.  The stadium of course has seen both triumphic and disastrous sporting events over the years but on this Thursday evening the visiting team were The War and Treaty and the result was only heading in one direction – an undeniably triumphant debut UK performance. In footballing terms this would have been a thrashing.

Husband and wife team Michael and Tanya Trotter are the powerhouse duo that front The War and Treaty but they were superbly supported by a stellar band complete with saxophone and trumpet horn section. We should also give special mention to their organist and keyboard player, Philippe Bronchtein, who provided a wonderfully gritty solo support set on acoustic guitar and is an artiste worth checking out in his own right.

The Trotter’s paths into the music business could not have been more different. Michael is a US army veteran having served in Iraq where officers recognised his musical talent and charged him with writing and performing songs for his fallen colleagues. Tanya won a talent show when she was just 13 and knew then that singing would be her life. Together they craft something quite remarkable –  a little bit soul, a little bit gospel, a little bit blues but a whole lot of heart and energy. Great bands don’t just sing their music, great bands perform their songs and engage with their audience drawing us into the stories and emotions of the lyrics and melodies until there is no them and us. Great bands are capable of creating a oneness in a room of strangers and The War and Treaty scored dead centre on that aspect. Any band that can get a normally reserved British audience to turn to their neighbor and hug them must be doing something right!

The performance started strongly and never dropped below overdrive for the entire set. Built around their latest album, ‘Healing Tide’ (watch out for it during the awards season!), the evening showcased the duo’s considerable songwriting talent – songs that are so grounded in the traditions of soul and gospel music that they leave you wondering how it is that you’ve never heard them before. Wrap the whole package up in a heartfelt message of love and harmony and it made for an evening that wasn’t just about amazing music but also lifted ones spirit to the point where everyone left the venue feeling a little bit lighter and a little bit less burdened having experienced the power that is The War and Treaty.