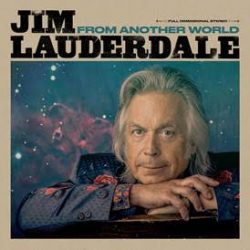 ‘From Another World’ is Jim Lauderdale’s, wait for it.. thirty-second album release. It is an astonishing accomplishment. Since releasing his first solo album 1991 he has released an album almost every year and sometimes more (there were three in 2013). Other artists with nigh on thirty-year recording careers take up much less shelf space with their back catalogues. And how many times have you perused the recording output of long-established artists lamenting that they haven’t made a really good album for years? The corollary of course is the much-respected songwriter who pumps out albums a little too regularly when an honest reflection might acknowledge that ever two or three records might condense into one that could have been a classic. So, hats off and three cheers for Jim Lauderdale for ‘From Another World’ – it’s consistently magnificent from start to finish; 12 original songs and forty-six minutes of top quality listening pleasure.

Over the course of his extensive recording career Lauderdale has sauntered around different genres; country, blues, rock, soul, folk and bluegrass. That interplay of influences and styles locates him well in the Americana cadre and largely because Americana itself is a term which tries to throw a rope around the recognisable but loosely definable. On ‘From Another World’ Lauderdale points his boots firmly toward his country roots. There are some beautiful elements to the records but the principal element for praise must be the vocal performance. Lauderdale’s voice is just a joy all the way through, his strong resonant timbre retains a tenderness that is classic country. Complemented by some wonderfully understated backing vocals and musicians that are bang on the money there is plenty to admire on this record.

The songs have a time-honoured familiarity tugging at the kind of eternal joy that this type of music can conjure music.  But the message is contemporary, and perhaps because finding joy can be difficult, Lauderdale wants to add his own antidote, he says of the album “This album is about the search for connection, love and understanding between people, about finding empathy in a world where it feels like folks are more and more at loggerheads. When the world outside your window feels too tough to bear, I hope you’ll step into the world we’ve created here”. Lauderdale catches the zeitgeist and reflects back concern and hope. Nowhere is it more apparent than on the brilliant ‘Listen’, the music is a consummate whole of beautiful arpeggioed guitar and sumptuous lap steel “You think you know everything/ But you don’t know a lot of things…. Listen, listen, listen/ Try not to talk for a while/ Listen, listen, listen/ Even though that’s really not your style”. Goodness me, aren’t there a few people around who could use a bit of that?

Elsewhere, the open track ‘Some Horses Run Free’ – excuse me – gallops along perfectly while ‘The Secrets of the Pyramids’ exhibits just how Lauderdale is able to craft his material in new and interesting ways. Closing the album is the magnificent ‘Are You Trying To Make a Song Out Of Us?’ where, again Lauderdale plays with well-known themes. This time looping back the traditional story-telling relationship country song with a pre-empting question that the situation is indeed ripe for a song.

Start to finish this album is a treat. If anyone is only as good as their last album, Lauderdale is safe – for a year at least!

Album number thirty two sees no let up in quality, a magnificent record