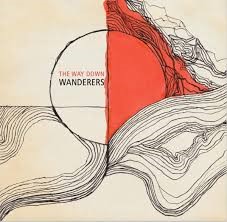 The Way Down Wanderers hail from Chicago and, although only playing, performing and writing together for 2 years, have steadily built a reputation as a band to watch. The opening track here ‘Dead Birds’ was an International Song Writing Competition finalist and gets the album off to a cracking start and sets a tempo that rarely lets up.

There is an energy in this music that brings a smile to the listener. Described as ‘folk rock’, it is easy to see why they have created a buzz with their live performances including what is, for this reviewer at least, the new phenomenon of “rest-stomps” – free impromptu acoustic sets at rest and truck stops along their tour routes. There are guitars, violin, mandolin, banjo and even some spoons thrown in here from this five piece and together they make an infectious whole.

In these days of vinyl revival, if this was an LP (which, according to the band’s website, it soon will be), then the ‘A’ Side is a belter with 6 tracks that get better on each listen. ‘Sweet Morning Vision’ bursts into life after a gentle intro and allows this very young band to showcase a maturity in their lyrics that bely their age – lead singers and co-founders Austin Thompson and Collin Krause are 22 and 18 years old respectively.

‘New Day Dawning’ starts with almost a minute of storming mandolin riff around which the whole song is built and, like much of the musicianship on the album, can border on the frantic on occasions. However, the more you let those repeat plays get into your head then frantic morphs into top drawer musicianship.

The first half is brought to a grand conclusion by the nearest you will find to a ballad on the album. ‘Hollow Man’ has a gentle rhythm that acts as breather from the relentless pace set by those opening tracks but is no less memorable for it.

If Side ‘B’ doesn’t reach the heights of the first half of the album then that is just to say that the songs are merely very good ones rather than crackers. Mike Marsh of The Avett Brothers has produced a collection of songs that highlight the songwriting and musicianship of this talented bunch. Get this lot playing ‘rest-stomps’ up and down the tedious network of motorways and service stations in the UK and a whole lot of weary travelers may find the caffeine intake surplus to requirements!