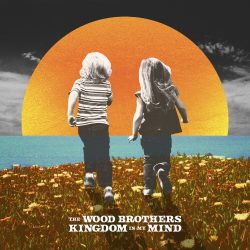 The new album from the Wood Brothers has a lot to live up to. ‘Kingdom In My Mind’ is the follow-up to their critically acclaimed, Grammy-nominated 2018 release ‘One Drop of Truth’. While it would have been easy for them to return to the same formula that lead them to success last time, the Brothers instead decided to change things up and record this one in a very different fashion.

In a spontaneously fresh approach, the band did not write a set of songs before going in to record them; instead, feeling inspired by instrumental jam sessions to test drive their new Nashville studio, the songs came organically. This, band member Chris Wood says, was a “liberating” experience that allowed them to banish any sense of self-consciousness they may have felt if they had recorded in their previously tested fashion.

It’s musically not a huge departure for the group, but it does flow in the way you’d expect it to come out of experimental sessions rather than structured writing and recording, with the opening intro of the opening track (‘Alabaster’) feeling every inch an improvised jam. The song itself speaks of a young woman moving forward in life and cutting ties; a man not understanding her ambition is described with: “Stuck in time like a fly in the amber / And he never transcends,” are a couple of the best lines on an album packed with many great ones.

‘Little Bit Sweet’ is an upbeat, sunny track whose lyrics focus on the impermanence of life and growing older. It’s hard not to feel moved when Oliver sings: “As I hold my little boy’s hand / Feel him growin’ up so fast / And my father holds on to mine / Feel him shakin’ hands with time.” ‘Jitterbug Love’ has a full-on rootsy, country vibe and sees Chris take over from Oliver on lead vocals for the first time on the album; it’s here we hear where the album title originates from too when he sings in adoration: “I’m crazy for you / There’s a kingdom in my mind / Where I find you all the time.”

The unrelated Wood Brother, Jano Rix, is next to take lead vocals on ‘Cry Over Nothing’, a song which builds to almost gospel heights with his soulful vocals and sincere delivery. While the title ‘Don’t Think About My Death’ conjures up a melancholic tune, it’s rockier, less sad and more defiant (“I will get high all alone in my room / I will survive these stories in my head / When I’m loving you I don’t think about my death”). ‘Little Bit Broken’ is a bluesy meditation on the state of the collective human psyche, while ‘The One I Love’ is the most folk sounding track on the album, a buoyant and joyful ode to a life partner (“I like a good temptress to stir my blood / But I go home to the one I love”).

‘Little Bit Blue’ is the song that most encapsulates the album as a whole; it’s outward-looking and philosophical but in a personal and distinctive way. “Little blue drop of water / Floating in emptiness / Everybody that I know and love / That’s where they live,” is as simple and accurate a description of earth as you can get. ‘A Dream’s a Dream’ is another bluesy affair, with a fast spoken and wordy bridge that would be impressive to hear live.

‘Satisfied’ features absolutely stunning vocals from Oliver – making it into the standout track – where he ruminates on the afterlife (“I got nothin’ left to be afraid of / Cause I will be satisfied / I’m gonna leave a big piece of heaven behind / And be satisfied”). We finish with a short reprise of ‘Little Bit Blue’ closing things out nicely.

The Wood Brothers took a gamble recording this record in a different style to their previous, but it’s a gamble that definitely paid off. If there’s any justice, this album will gain more than just a Grammy nomination next year.