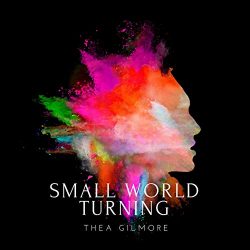 The first release for a couple of years ‘Small World Turning’ represents a return to the more acoustic stylings of earlier Thea Gilmore recordings. Opening with an a cappella cover of ‘Mockingbird’ that fades into the silence the scene is set for a series of narratives where the vocals are front and centre. ‘Cutteslowe Walls’ starts the ball rolling properly, alluding to divisions in society between the haves and the have nots.

The following ‘Glory’ has a similar lyrical feel as Justin Currie’s ‘No Surrender’ with its strident delivery and barely concealed outrage. This is a strong political opening which the album follows through on with repeated references to contemporary themes. But this is no bitter pill as the arrangements and production couch these songs in lush and attractive canvasses. ‘Don’t Dim Your Light’ has Seth Lakeman and Cara Dillon in the mix and Dillon reappears in the delicate and ethereal duet ‘Grandams Gold’. Both her’s and Gilmore’s voices work beautifully together and the splashes of colour with the whistle leavens the potentially overpowering sweetness of the tune.

The lack of a traditional drum kit on this album allows it not to sink into a conventional ‘band’ feel but the album as a consequence sometimes feels a bit top heavy. Some of the songs could have been more rooted in the rhythm but overall this is a minor criticism as the power of tracks like ‘Karr’s Lament’ with its extraordinary vocal performance indicate a performer at the top of her game. Similarly ‘The Revisionist’ demonstrates a clear anger burning at the heart of this artist who could quite happily sit back and churn out the anodyne lyric but instead chooses to rail against the ‘motherfuckers waving flags out in the street, throwing hatred like confetti, drinking populism neat’.