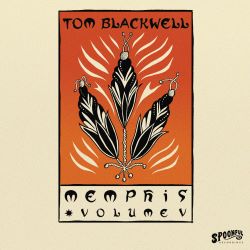 Tom Blackwell is his own man. A roaming, itinerant past has brought him to his Liverpool base via a number of stopovers, the most important and relevant of which would be Nashville. But, being that he is, as mentioned, his own man, Blackwell, having achieved his long-held dream of reaching the States, eschewed the easy route that opened up to him in Music City.

Time spent in Manchester with regular gigs at the Chorlton Folk Club kindled Blackwell’s affection for American roots and folk and a strong desire to connect to the music in its homeland. 2015 saw him release ‘Tyrone The Gun’ which was the result of numerous sessions on the front porches and spare rooms of Nashville sound engineers. Buoyed by the positive reviews of that debut Blackwell found himself with offers of musical collaborations in Nashville.

Rejecting these offers in favour of a return to Liverpool Blackwell embarked on a two-year plan to record stripped back and emotive versions of his early songs. Hence the release of ‘Memphis Volume V’ which is the final act in a five-volume project following previous releases ‘Memphis Vol. I – IV’.

Recorded live in his Liverpool studio this is a beautiful piece of work. Blackwell has a crystal-clear voice which is perfectly suited to this minimalist approach of acoustic guitar with occasional harmonica. Call it folk, call it American roots or call it a gorgeous piece of country soul, whatever the label this is music to wrap itself around the listener like a warm comfort blanket on the bleakest of autumn nights.

He may have chosen to shun Nashville for his Liverpool home but these songs, with their blues, folk, soul and gospel influences, are a gift Blackwell has brought home to share with those fortunate enough to have caught him live as he plies his trade across the intimate venues of the north of England.

Blackwell is one of those singers who have the ability to deliver emotion to every line, to have us believe that he has lived and suffered through every tale that he tells. This album, with its pared-back approach, is all about the voice of Tom Blackwell. The musical territory that Blackwell inhabits, the man with the guitar with stories to tell, is a crowded one. That he has, on ‘Memphis Volume V’ lifted himself above that crowd is testament to that voice and the man’s songwriting skills.

Emotive, soulful and stripped back high-class piece of singer-songwriting