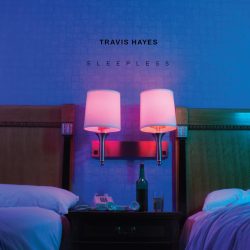 Travis Hayes’ sophomore album ‘Sleepless’ is impressive from the first listen. From start to end this predominantly rock album is easy to listen on repeat as it is hard to find a weak link between the ten tracks. The album stemmed from Hayes lamenting the loss of his friend who died after being hit by a drunk driver. The strong emotions that he felt when grieving for his friend are clearly reflected with strong storytelling lyrics throughout the LP.

Hayes has an intensity in his voice that matches well with the strong guitar licks and heavy drumming that features throughout the album, especially noticeable in the title track ‘Sleepless’ and in ‘Past Lives.’

‘Empty Orchestra’ stands out the most on ‘Sleepless,’ replacing the heavy musical backing with some guitar plucking and some light strings to tell the story of lost youth, making it feel very intimate. The ballad hits on the innocence of high school issues and drama and how as an adult the majority of them become so insignificant, with lyrics like “held hands on the hill behind our high school, we kiss so hard our lips bleed, so afraid this feeling might leave.”  Instead of looking at it in retrospect Hayes looks at it with the same wonder that a teenager would experiencing big life moments for the first time.

‘Sleepless’ is a standout album for many reasons. The high production values shown throughout the album are reflective of Hayes’ talent across the board. His storytelling lyrics and amazing guitar make this album a must listen.