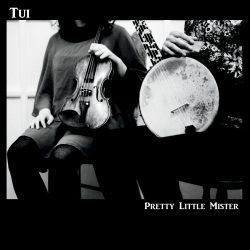 Some music requires repeated listening and reflection to grasp the artist’s intent. This album is not one of those. It is simply a joy to listen to from the very first time you hear it. Whether this is because it is a well-selected compilation or because we are already so familiar with traditional music is unimportant. Tui have taken old-time music and made it at once fresh and vibrant.

Jake Blount and Libby Weitnauer formed Tui in 2018. Jake is a multi-instrumentalist and a guest lecturer in music history. Libby has several degrees in classical violin. Of course, none of this matters one jot except to help understand the depth of knowledge and interest they bring to researching and recording Appalachian music. Here they have selected and captured the huge diversity of sound that can be depicted with a fiddle and banjo. The music is simultaneously technically demanding and complex while remaining a pleasure to the ear. They have recorded these songs with undeniable talent and a genuine love of the musical style.

Part of the intent of this collection is to recognise the diversity of artists who originally recorded Appalachian music. They have researched and selected the tunes to reclaim the diverse racial and cultural history behind old-time music that is so often depicted as evolving from a white Christian tradition.

Each tune is detailed in the liner notes, including who recorded it, what is known about them, why it has been selected and the tuning of the instruments used in each recording, which is enough to delight even the most ardent enthusiast.

‘Crazy Horse’ demonstrates perfectly the minimalist adage, less is more. Jake and Libby learned this tune from a recording of Lyman Enloe, a fiddler from Lee’s Summit, Missouri, although the provenance is uncertain.

‘Old Aunt Jessie Get Up in the Cool’ arguably exemplifies the intent of the album best. This is evidenced by the liner notes. This tune comes from Teodar “Teolee” Jackson, a Black fiddler who lived in Austin, TX. His style bridged old-time, Cajun and blues fiddling. Tary Owens recorded Jackson playing this tune in 1965-66. On that recording, Jackson’s only accompanist is a single guitarist playing a single chord. Jackson makes up for the lack of harmonic variety by totally improvising the structure of the tune, switching to different sections and harmony parts apparently at random. Jake and Libby created a spreadsheet to map the structure of the tune, and arranged it for two fiddles to accentuate the tune’s antiphonal phrasing while retaining the hypnotic drone of the guitar part. Fiddle tunings: FCGD, BbFCGD

‘Twin Sisters’, ‘Texan Traveler’ and ‘Cookhouse Joe’ are among the other outstanding tracks in this fine collection but it is truly a matter of personal taste which tunes are arguably the best.

If this was solely an academic activity in cataloguing rarely heard old-time music and meticulously recording the history and characters behind each song it would rate highly. It is, however, a vital work of musicianship in its own right. This is not a pastiche, it does not imitate or copy, it is alive.

A masterclass of old-time Appalachian recording