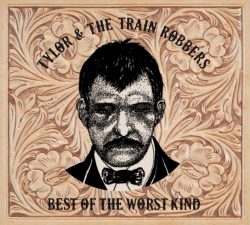 There’s a pleasant “open-ness” to some of the best Americana – that feeling of room to move, where you can clearly hear all the instrumentation and the lyrics and yet still see spaces in the songs. Tylor & The Train Robbers have really nailed that sound on this, their second album. The production is crystal clear and it gives the listener the opportunity to hear just how good this band is. Well written melodies supported by some fine playing, guitars and pedal steel weaving together to create exactly the backing these story based songs need.
Tylor Ketchum, frontman and songwriter for the band, claims direct descent from Western Outlaw Black Jack Ketchum, a member of the infamous Hole in the Wall Gang, hence the name of the band. On this album Ketchum has taken the interesting route of drawing parallels between the life of a 19th Century outlaw gang and a modern band on the road – and you can see the connections in the songs Ketchum writes, songs about the loneliness of an itinerant lifestyle, as in ‘Lost and Lonely Miles’ or the odd characters you meet out on the road, like the bar-fly in ‘A Place Like This’, “I’ve had rough times that I beat and countless demons I don’t want to meet, that’s why I sit here in this seat losing count and butting in. I don’t see that I’ve got a choice, always the first to raise my voice. It never carries over the noise of this run down dive”.

Ketchum has a great way with a lyric and there are some very strong songs on this album, he really can tell a story and that’s particularly obvious on the track he’s written for his ancestor, ‘The Ballad of Black Jack Ketchum’ – “My first scream was on Halloween, born October 31 1863, before the west was won. I set out young before anyone could ever tell me no. Those were different times and that was long ago”. His song takes us through Black Jack’s career and it’s an impressive piece of narrative story telling and it’s the strength of that songwriting that really drives the album, aided and abetted by a very fine band who all play their part, though special mention should go to the lead guitar work of Johnny “Shoes”(?!) Pisano. He’s, apparently, some 40 years older than Tylor Ketchum but, if that’s the case, it confirms that age is no barrier to creative musicianship, as some of the guitar work he puts in on this album is outstanding.

By this point you might be wondering if there are any downsides to the album. Well, it’s a very good album but few albums are without their faults. One or two of the songs sound a little forced, as if the constraint of trying to fit the songs into the narrative around the album has dictated the structure of the song; ‘Still Getting High’ and ‘Few and Far Between’ are a couple of songs that don’t seem to gel quite as well as others.There’s also the fact that Tylor Ketchum has a very distinctive voice that won’t appeal to everyone. This is mitigated in places by the harmony work of Johnny Pisano’s daughter, Jennifer who, apparently, regularly works with the band on live shows, so they’re obviously aware of the need to mix things up a bit.

‘Best of the Worst Kind’ is a clever and well put together album that engages both musically and as storytelling but there is a nagging concern that, when the novelty of the storyline wears off some of the lustre of the music may go with it. It is, perhaps, the curse of concept albums – when you no longer buy into the concept do the songs still stand up without it? An album like this is a brave move for a second release and the band might have played things safer by establishing themselves more before stepping into high concept territory; but there are no prizes for playing it safe in the music business and this could well prove to be the breakthrough album this band deserves.