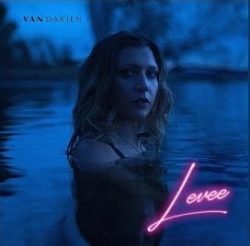 In the  (highly recommended) film ‘Still Crazy’, as plans forged by the 1970s British psychedelic rock group Strange Fruit for a comeback tour run headfirst into a morass of cliched band problems like  XXXL egos,  deep-rooted personal feuds,  and addictions to certain mind-bending substances, there’s a point where Billy Connolly, playing an ageing roadie, observes with wry world-weariness “In an uncertain world, it’s reassuring that some things stay the same.”  And funnily enough, given these current, extraordinarily weird, times, you could say the same about Texas-born, Nashville based singer Van Darien’s debut album ‘Levee’.

That’s because ‘Levee’ comes across, at least initially,  as a very straightforward slab of well-cooked middle-of-the-road guitar-centric rock,  with a few Americana twists thrown in to provide the sizzle.   Some country-esque guitar licks lurking discreetly in the background underline those links between the two genres, but the strongest connection to Americana is surely in the lyrics. These deal with subjects as familiar as small-town, working-class folk struggling to make ends meet on the title track, or the equally well-exploited metaphor of fast cars (and car crashes)   for raw passion and sex – “Honey just keep your foot on the pedal”, Van Darien pleads in ‘Twisted Metal’ – and as for ‘Gone’, where else would  Van Darien go to  “wash me free of some memories”,  as she puts it, of a devastating love affair, but – you’ve guessed it –  down to the good ol’ river.

We’ve been there before, countless times, but do we mind going back there again? Not really, particularly when Van Darien – who said in an interview somewhere that she’s fascinated by old cars –  does such an excellent, unfussy job of tuning up a kind of hard-edged rock sound that could easily be parked in any self-respecting late 1980s AOR music catalogue.

It’s true this kind of power-chord-laden rock format isn’t exactly groundbreaking stuff, but it certainly lends itself to a kind of grassroots authenticity, particularly when backed up with  Van Darien’s own raw-throated singing style  –  strongly reminiscent on songs like ‘Insanity’ of an early, less ragged-edged, Lucinda Williams.    Van Darien can even get away with lines as cheesy as “ the framework to an empire, the truss rod in this guitar” when discussing the values of  ‘American Steel’, which sounds like a pretty trite subject for a song, on the face of it, but here at least turns out to be  a heartwarming anthem outlining why and how that industry underpins so much of American daily life. (Just to add to the sense that this is the ‘real deal’, her father, who co-wrote the song, was himself a welder.)

Interestingly, what few counterpoints there are to this main body of broad-brushed, down-home, rock ballads feel less successful. For example,  ‘Low Road’, a withering reflection on the pleasures and perils of gossiping, was originally a much snappier blues-rock number on her EP of five years ago, ‘Silent Sparrow’, but here is given a spooky music-hall makeover, complete with barrelhouse piano. The track has got a certain novelty value given the way the rocky electric guitar sounds dominate the rest of the album, but not much else.

The most striking contrasts, in fact, to the more straightforward, well-trodden turf of the first half of ‘Levee’ emerge in the deeply melancholic, graceful lyrics of the last three songs. ‘Cardboard Boxes’, the one song of the album’s ten tracks not written by Van Darien, is a stunning reflection on the challenges of shedding emotional baggage, ‘The Sparrow and the Sea’ is a kind of timeless folk tale about love affairs that are destined never to work out and, finally,  ‘What’s Killing Me’ opens up on self-destructive habits that are impossible to quit. Cheerful subject matter this ain’t and nor is it any way as conventional as the lyrical material in the opening half of ‘Levee’. Rather, collectively the three songs form a spellbinding and admirably ambitious way of rounding out the album,  and one which bodes extremely well for future work, too. And it also proves that just because Levee sometimes feels like top-grade comfort listening for classic rock fans, at other points Van Darien can’t help blasting through a few boundaries to establish her own, powerful  – and original –   musical identity.

An enjoyable ramble along the frontier pathways of Americana-flavoured rock