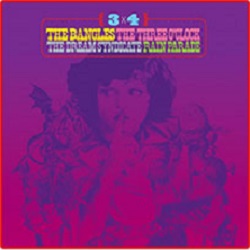 Ah, those heady days of the Paisley Underground, a music scene which even when observed from across the ocean offered an alternative to the prevailing pop-scene that dominated the UK music charts. ‘3 x 4‘ offers up a kind of re-visitation of those days, observed through a distorting glass, as the various artists – The Bangles (originally The Bangs), The Three O’Clock, The Dream Syndicate, Rain Parade – each take on a track originally recorded by the other three bands. ‘3 x 4‘ was originally released as a double vinyl LP set on Record Store Day 2018, so it’s not an entirely new release, but it’s a significant enough one that it is worth noting now that it has at last been given a CD release.

The concept is straight forward enough – four of the key bands from that long gone scene get together and celebrate each other. It’s a nod to their original mutual support and cross-fertilisation, when the bands in question might well be appearing on the same bill, and where there was every chance that they’d step in and take guest spots on stage with the other bands. That’s the story that’s spun in the accompanying booklet where each band explains their song choices and reminisce some about the vibrant scene they tried to create around a number of bands who saw the world in somewhat the same way – and wanted to emulate a similar era of music, whilst still giving it their own spin. And it has to be said whatever happened after that original early 80s scene created them, with bands dissolving or – in the case of The Bangles – conquering the mainstream – back together for this project they sound inspired and creatively revitalised.

Some of the songs are quite similar readings to the originals – there’s plenty of jangly guitar and Los Angeles sunshine bottled into these songs, but there’s also a lot more depth than that might suggest. Sure, from the first moment Susana Hoffs’ vocals appear on The Three O’Clock’s ‘Talking in My Sleep‘ you’d swear this had been a Bangles song all along. Some other songs though cross the border into darkness – Rain Parade’s take on ‘When You Smile‘ moves from distorted guitar buzzing with feedback into a gentle acoustic breeze carrying soft vocals courtesy of a couple of Bangles and then the thumping drums kick-in, ushering in a love song that is all glorious gritty menace – and then plays a similar trick on the fade out. Steve Wynn has a lot of fun with The Bangles’ ‘Hero Takes a Fall‘, which has an added layer of intrigue in that it was written about him: “I won’t feel sad at all / When the hero takes a fall” he declaims over a typically Dream Syndicate pulsing bass-line, wall of drumming and buzz-saw guitar. The Three O’Clock add a strong Indian drone vibe to ‘Tell Me When It’s Over‘ for one hell of a dreamy trip.

Like all great albums it’s all over too soon – really, couldn’t they have done ‘6 x 4‘?  Probably, but ‘3 x 4‘ is what we have and it’s a dream of a record though, beautifully produced and so well balanced – although The Bangles do get dragged in fairly often to guest vocals onto others’ tracks. But isn’t that in keeping with the concept? And since it sounds so great does it matter? It is and it doesn’t. The Paisley Underground – a name which all participants here now seem able to accept – came and went too soon, so it’s great to have this belated coda to treasure.

Four bands play swappsies with each other's songs and make a Paisley Underground dream of a record.