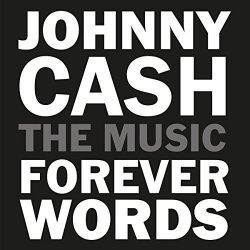 Johnny Cash was one of the most iconic musicians of all time and also, one of the most hard-working, with 60+ recorded albums throughout his career, however, his legacy didn’t end with the music he recorded during his lifetime and when he passed, he left a catalogue of poems, writings and musings to his son and co-producer of Forever Words, John Carter Cash. With this material in hand, John Carter Cash enlisted another producer, Steve Berkowitz and an assortment of musicians to bring their interpretation of the words to life, and after two years, we have Forever Words.

The album starts slowly, with two of Johnny Cash’s lifelong friends, Kris Kristofferson on vocals and Willie Nelson on the guitar, reciting the last poem Johnny ever wrote down and is a short but lyrically poignant way to begin the collection which leads straight into the first full song ‘To June This Morning’, an acoustic track and early highlight, performed by married couple Ruston Kelly and Kacey Musgraves, which takes what was written and amplifies the words as they are delivered with such feeling, giving the song an extra dimension due to the sense of authenticity in the performance.

Bookended by Brad Paisley’s classic country contribution ‘Gold All Over The Ground‘ and Alison Krauss’ narrative-driven ‘The Captains Daughter’ is one of late-Soundgarden frontman Chris Cornell’s final recordings before his tragic passing this time last year, ‘You Never Knew My Mind’. The track is one of the album’s many highlights, albeit with a bittersweet taste due to the lyrical content being so personal and delivered with heartfelt conviction in the way only Cornell could with such tender subject matter. The juxtaposition of his soaring, cracking voice against the mellow guitar picking is mesmerising and the track as a whole serves as a reminder of how much his voice, just like Cash’s, will be sorely missed.

Much of the album leans on the roots music framework that Cash was so well-known for such as T-Bone Burnett delivering his signature sound on ‘Jellico Coal Man’, Elvis Costello’s unmistakable croon on ‘I’ll Still Love You’ and John Mellencamp’s gravelly-toned ‘Them Double Blues’ however, some artists have taken the songs in a slightly different direction, including a leftfield, ambient effort from Robert Glasper feat. Ro James which seems slightly out of place in the collection, however, it does highlight the reach of Cash’s influence and the versatility of his words when interpreted in different styles of music.

In conclusion, every track in this collection is worth spending time listening to, if only to hear the words of one of the most iconic musicians of all time, whether you’re a fan of Johnny Cash himself, or each of the individual contributors. There is depth, meaning, variety and excellent musicianship on show throughout and each track is testament to both the great man himself and the talent of the people that have brought his words to life on ‘Forever Words.’ Here’s hoping for a part two…

Carefully and lovingly assembled collection of poems given life in music