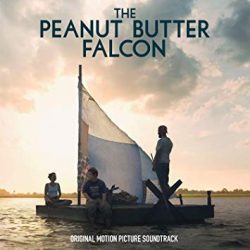 Film soundtrack albums are always interesting beasts. You need to think about how they support the film they are made for but you’ve also got to assess them as a collection of music. There are a number of soundtrack albums that have gone on to be significant hits in their own right and the better ones really can grab your attention. Probably the first thing to say about the soundtrack to ‘The Peanut Butter Falcon’ is that it’s not quite on a par with something like ‘Oh Brother Where Art Thou’, a particularly successful soundtrack album that drew heavily on Americana music; but it does have its charms and some stand out tracks.

I should say that I haven’t seen the film in its entirety – but I have seen a number of clips and the soundtrack would seem to be well suited to the movie action. The film itself is a mix of road trip and coming of age themes that sees a young man with Down syndrome abscond from a residential nursing home to follow his dream of attending a professional wrestling school. It’s an unlikely premise but, from what I’ve seen, it’s a fun movie. The soundtrack, which draws on a range of American music styles that includes Bluegrass, Country, Gospel and more, features contributions from the likes of Sarah Watkins, Gregory Alan Isakov, The Staple Singers and The Punch Brothers.

The standout track is, almost certainly, Parker Ainsworth’s ‘Running for So Long (House a Home)’, which runs over the end credits of the movie. Ainsworth co-wrote the song with the film’s writers and directors, Michael Schwartz and Tyler Nilson, and it’s a beautifully simple song, driven by Ainsworth’s simply picked guitar and well sung by him with sublime harmony vocals from Jessie Payo and Paris Jackson – “What makes a house a home? / Been running for too long / When I met you, I couldn’t let you / What makes a house a home?” It’s a perfect road movie song.

The bulk of the film score is composed by Zach Dawes and much of it is very Americana based. Writer/Directors Schwartz and Nilson were, apparently, closely involved in steering the use of music in the film, having a clear idea of what they wanted the film to sound like. This soundtrack and the choice of music used is central to the film and the feel they wanted to get across. Much of the music has a stripped down approach to the arrangements, using acoustic instruments and minimal orchestration. The soundtrack has that feeling of open countryside and being off the beaten track. This is particularly true of pieces like ‘Travelling Theme’ and ‘Love Me in Kind’, which have the sort of simple melodies that you’d like to hear developed further. This is the frustration of sound track albums, since many of the tracks will be short, designed more as a music bed for the action on screen than songs in their own right. You hear these melodies that sound so promising only to have them disappear within a minute because they no longer serve the visual action.

The use of vintage songs within the soundtrack is particularly well done. The Staple Singers’ ‘Uncloudy Day’ is as beautifully sung a piece of gospel music as you would expect from these great artists; a song that dates back to the late 1800s and which was first recorded by the Staples in the 1960s. There are also two traditional songs from the American folk artist and banjo player, Ola Belle Reed and newer readings of old folk and country tunes from the likes of The Time Jumpers and Chance McCoy. Along with the specially composed ‘Running for So Long’ there’s also Gregory Alan Isakov’s beautiful ‘The Stable Song’ to bring the music bang up to date while still retaining that traditional feel.

This is a nicely balanced soundtrack that, from what I’ve seen, suits the film very well. The only track that seems out of place as a piece of music is the hard rock of ‘Wrestling Theme’. You can understand why they’ve used a rock track in this context but it really jars when you have the album running as music – you’ve been drifting along in this beautiful pastoral mood set by the use of understated Americana when you’re suddenly assaulted by a full on rock track. I’m sure it works very well in terms of the film but it doesn’t work so well without the visual cues!

This is a good soundtrack album – not one of the greats but certainly good and includes enough interesting material to catch the attention of Americana fans; But, at heart, it is a soundtrack album and that’s likely to limit its appeal to a wider audience.