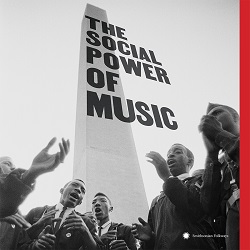 This characteristically vast collection from Smithsonian Folkways tackles a multitude of musical forms and interpretations of the term “social power” over four jam-packed CDs. The four discs are, more or less, themed – CD1 is ‘Songs of Struggle‘, CD2 is ‘Sacred Sounds‘, CD3 is ‘Social Songs & Gatherings‘ whilst the final CD closes the circle with a return to political music on ‘Global Movements‘. Each of these themed selections draws on previous releases from Folkways and other labels that have had their output brought into the Folkways fold. This makes for selections that cover the political – and let’s be straight here, left of centre politics – over-spilling of the mid-20th century folk revival in the USA and the UK, a variety of “world music” with a core of American gospel and blues, and a similar wide spread and multi-lingual selection of political songs.

Taking them a CD at a time, ‘Songs of Struggle‘ is likely to be the most familiar music for most listeners, with the likes of Woody Guthrie, Pete Seeger, Paul Robeson, The Almanac Singers and Ewan MacColl & Peggy Seeger prominent in the mix. Opening with a powerful live recording of ‘We Shall Overcome‘ by The Freedom Singers which makes the case for embedding an idea through communal singing, a vast choir intoning their commitment to the Civil Rights movement – it’s a mighty wind indeed. Cleverly the next track up is Woody cheerfully proclaiming equality of real estate ownership on ‘This Land Is Your Land‘ – a lone voice and guitar making just as powerful an impact on the real National Anthem of the USA. Pete Seeger pops up a couple of times to lead communal singing about justice and equality (‘If I Had A Hammer‘) and add the simple anti-war anthem ‘Where Have All The Flowers Gone?‘. Similarly familiar and straightforward in making their case are Ewan MacColl & Peggy Seeger on ‘Legal/Illegal‘ comparing what are deemed to be crimes of the individual with the similar, but legal, behaviour of the wealthier classes concluding their polemic with “It’s legal to sing on the telly / but they make bloody sure that you don’t / if you sing about racists and fascists and creeps / and thieves in high places who live off the weak/ and those who are selling us right up the creek / the twisters the takers the conmen the fakers / the whole bloody gang of exploiters“.   Not much changes.  There’s a nice contrast with the next track which is as far from this frank, straightforward  and musically unsophisticated approach as it is possible to be – Barbara Dane & The Chamber Brothers offer up another Civil Rights Protest anthem ‘It Isn’t Nice‘ which has a beautiful and soulful jazzy-folk arrangement, with elegant little flicks of guitar and Barbara Dane’s superb and wide ranging vocal. Of course it’s still the words that matter “They murdered folks in Alabama / They shot Medgar in the back / Did you say that wasn’t proper ? / Did you stand out on the track ? / You were quiet just like mice / Now you say that we’re not nice / Well if that’s freedom’s price, we don’t mind“. There are some great, and important, recordings on this album – some familiar, but there’ll be a few surprises for most people.

‘Sacred Sounds‘ takes quite a different path with more field recordings from different religious gatherings – these can be very effective in their strangeness, The Shape-note singers at Stewart’s Chapel have an otherworldly feel with music that feels like an eerie folk tradition hangover. By contrast the carollers recorded at the Black Bull in Ecclesfield are surely the local church choir, which squashes all sense of spontaneity out of the music, heartfelt it might be but it’s formality is only punctured and given some humanity by the clanking of glasses, and some chatting, in the audience. These field recordings are backed up by several well rehearsed gospel groups with well known hymns, but perhaps more interesting are the different chant based recordings such as ‘Zuni Rain Dance‘ and the catchily titled ‘Many Eagle Set Sun Dance Song‘ – although it is quite likely that these won’t encourage many repeat listens. For many Americana UK readers the finest tracks on the album though are likely to be the bluegrass numbers, ‘Will The Circle Be Unbroken‘ by the Strange Creek Singers and the spirited ‘I’ll Fly Away‘, which is full of a simple joy when sung by Rose Maddox.

‘Social Songs & Gatherings‘ see’s the arrival of dance music, and the other way that music affects social cohesion and forms bonds of community – we’re talking partying: there will be dancing, there will be opportunities to meet new people and there will be beer. This last is emphasized by Flaco Jiménez and Max Baca’s accordion-driven Tejano conjunto music ‘Beer-Drinking Polka‘ and Wisconsin’s own The Goose Island Ramblers’ whose heart breaking declaration that ‘In Heaven There Is No Beer‘ is framed in a mix of polka, Scandinavian fiddle and early country music. Social music crosses boundaries, and it travels. There is an eclectic mix of sounds across this album – covering up-tempo blues, barn dancing old timey fiddle tunes (‘Golden Slippers‘ includes called instructions should you be moved to get up on your feet), jazz and zydeco amongst others – although some might hear just a drop of disco filtering through on the Sam Brothers Five track ‘SAM (Get Down)‘ which has the youthful zydeco band freely appropriating Chic’s ‘Freak Out‘. Filling out this album are recordings of children’s songs and First Nation’s chants such as ‘Rock Dance Song‘ from the Cree and Metis traditions.

The final album of this big box set is ‘Global Movements‘ – in effect a return to the protest music of the first album, but this time taking more of a “World Music” viewpoint – it’s hard to comment too closely on the lyrical content of these songs, but something that does strike home is that, within this selection at least, there is a tendency to frame the protests within quite beautiful music. Marcel Khalife sings the epic ‘The Passport‘, which runs to almost ten minutes, accompanying himself on the oud – and the Lebanese born and classically trained singer-songwriter hits peaks of emotion through the music.  It’s a truly arresting listen, even if the lyrics are completely opaque. There’s an additional layer of meaning in the contribution of Cantor Abraham Brun – who sings in Yiddish in a classical song form – when one considers that one of the many places this holocaust survivor sang ‘Why Should We Cry‘ was in Auschwitz, having been taken there from the Lodz Ghetto. From the Dominican Republic Expresión Joven are probably the nearest fit to the American Protest Folk of the 1960s, with ‘A Desalambrar (Tear Down the Fences)‘ mixing beautiful harmonies with declarations of dissent. It’s a great sound that powers along.

Overall ‘The Social Power Of Music‘ is a weighty musical selection from the deep vaults of Smithsonian Folkways. Some tracks are going to be of only mild interest, and some may already be well known, but there’s always a gem waiting in the wing to appear after each overly worthy selection. ‘Sacred Sounds‘ is probably the weakest of the albums, but any overview of social music and its power to move people is necessarily going to need to touch on these themes. Anyone looking to sample a wider musical palette is going to find plenty to intrigue them here.

About Jonathan Aird 1300 Articles
Sure, I could climb high in a tree, or go to Skye on my holiday. I could be happy. All I really want is the excitement of first hearing The Byrds, the amazement of decades of Dylan's music, or the thrill of seeing a band like The Long Ryders live. That's not much to ask, is it?