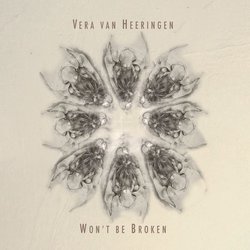 Look, there are a lot of acoustic-based female singer-songwriters out there who are recording and performing in the same arena as Vera Van Heeringen; no need to name them here as this review is part of VVH’s 15 minutes, not about them. Just check out the album reviews on AUK for 2020 so far if any confirmation is required. That Van Heeringen has made it to album number three must therefore count for something. ‘Won’t Be Broken’ has reached us via her birthplace and childhood home of the Netherlands, her current home in the English and Welsh borderlands and recording studios of Lincolnshire and Yorkshire. It was produced and engineered by Dearne Valley legend Andy Seward, emphasising its zeitgeisty Northern Powerhouse credentials.

Seward is also the bassist in her crack trio, where Van Heeringen herself plays effortlessly flawless guitar and mandolin and which is completed by guitarist Dave Luke. Luke has played and toured widely with deep country acts like Gail Davies whilst Seward has a much folkier background; working in Kate Rusby’s band as well as stints with Eddi Reader and Martin Simpson. The LP is augmented by a number of storied guests from the folk / country hinterlands including Jock Tyldesley, Joel Savoy, Keith Angel, Dirk Powell and, perhaps most interestingly of all, former Magazine new wave keyboard provocateur, Dave Formula.

As good a player as she is it is just possible that Van Heeringen is an even better songwriter. While the songs are resolutely embedded in acoustic music traditions from both sides of the Atlantic, her original yet contemporary sound, is built upon resonant and empathetic songwriting which connects directly and immediately with the listener. The true joy of the record is its ability to bring together her consummate virtuosity with that of the other players in ways that truly serve her direct and powerful songs. Whilst airy and spacious, the sound created is compelling, and full of dynamics. Her graceful yet vigorous guitar style underpins a confident unaffected vocal quality and beautifully companionable instrumentation from the supporting cast.

Throughout the LP, elements appear that serve to bring colour to the arrangements; the bluesy piano on ‘Running’, Formula’s soulful Hammond on the title track, and the Cajun flavoured accordion on closer ‘Blankets’. This final track is looser and more up-tempo than the rest of the record and sounds like the shackles have been removed at the last and everyone is just having fun in the studio. The infectious groove going on here would make a fabulous portent for possible future directions.

‘Won’t be Broken’ reflects the presence of geographical and musical genre borders in its creation. Yet these remain flexible borders, of porous resolution, that facilitate rather than hinder cross-border cooperation – they are bridges not walls. In this spirit it’s not cool, or useful, to be a genre snob, worrying what box the record should fit into, whether she has got the inflections and intonations just right or if the instrumentation properly reflect the genre’s traditions. Neither is it useful to impose these restrictions, to seek to define or limit what the artist does or how they should be received as a result. However…

… this is resolutely, unflinchingly a country-folk record (why not folk-country?). If the aim is to enable people to understand the sound of this record then describing it as country-folk would nail it, clearly and cleanly, especially for readers of this august mouthpiece. It would immediately bring to mind the sympathetically traditional yet fresh sounding records of Kate Wolf, Nanci Griffith, Iris Dement, or Gillian Welch for example, all of whom have lived and worked in the fertile ground at the border between country and folk. ‘Won’t Be Broken’ offers a largely stripped back acoustic pallet that is, for the most part, gentle in feel yet still potent and compelling. It also manages to avoid the dangers of sentimentality sometimes seen in the work of similar artists. – its outlook is instead powerful and affecting with an occasionally dark perspective on the world.

At its core then ‘Won’t Be Broken’ is a ‘songwriter’s’ album, the words are clearly very important to the project, they reveal their intelligent, poetic insight into the human condition slowly over repeated listens. It seems as if they were what drove the project and where its creation started. That Van Heeringen has managed to craft a musical context so deft, nuanced and powerfully supportive is a testament to her ineffable craft and good taste.

With this record Van Heeringen has managed to carve out a clear space for herself in what is a significantly congested field. Not surprisingly, she is happy to be in this space, describing ‘Won’t Be Broken’ as “the record she has always wanted to make”. We are grateful she got to round to it.

Powerful and entrancing missives from the country - folk borderlands