Halifax has come up in the world don’t ya know, such that it has reached the giddy heights of (almost) favourable comparison to a minor neighbourhood in the eastern fringes of London; having been dubbed ‘Shoreditch of the North’ by Northerners who ought to know better. This moniker seems to rest on the availability of significant quantities of eye wateringly expensive DDH NEIPA and Imperial tonka bean, vanilla, chocolate and hazelnut Russian breakfast stout, together with a growing live music scene that is well stocked with both local and touring acts. One benefit of this seems to be that whilst independent venues may well be facing significant challenges across the country, in the Calder Valley we seem to get a new one each month.

The Lantern is one of these additions and was recently host to an episode of rock ‘n’ roll debauchery, depravity and downright wickedness that it is difficult to conceive of if you were (un)fortunate enough not be in attendance.  As Mr Long Legs himself observed early on “I can see some people here in Halifax tonight, they got low down ways.” Indeed and not just us in the audience.

The three-quarters full room of wide eyed, eager subjects was given entirely appropriate preparation for the events that were about to unfold by a Salfordian mob known as Thee Windom Earles. They offered songs about toupees, cocoa pops, monkey faces and pornographic magazines, with suitably shambolic endings and, after completing their task to the great satisfaction of the growing crowd, they were last seen in their shark’s tooth necklaces, Los Straightjackets style gimp masks and suitably moody rock ‘n’ roll black outfits, surfing the garage soul wave down to Sowerby Bridge and back across the Pennines

The howling, moaning, testifying ne’er-do-wells from New York City known as Daddy Long Legs were in town for a Sunday night sermon of life-affirming proportions. Right from the off we are greeted with the enquiry / entreaty, “Aaaallll aboard, are you ready to testify?” and whisked off for a journey on the ‘Death Train Blues’, not stopping until we are deposited, 75 minutes later, back in the room in a state of ‘Motorcycle Madness’, supremely sweaty, hard of hearing and ready to sell our souls to the first fiend we come across for one more song. 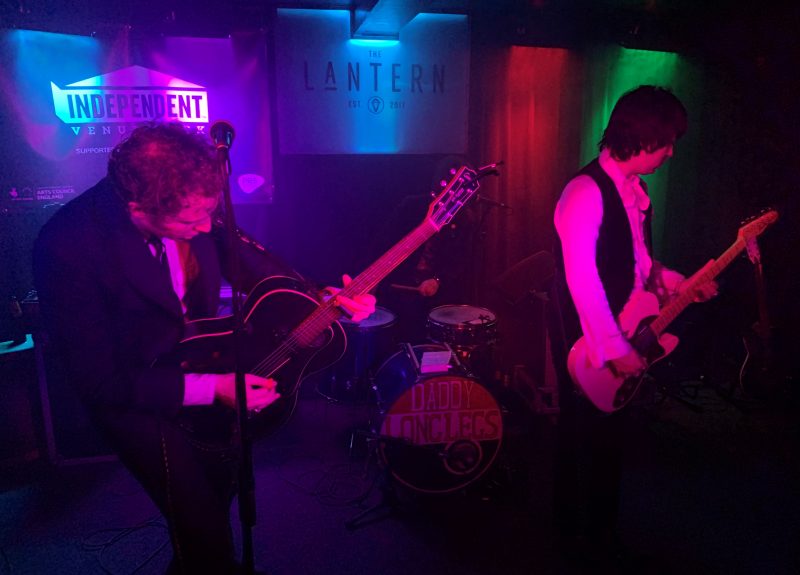 From start to finish the whole experience feels feral and haphazard, taking place on the edge like it could fall apart at any minute or worse (better?) still, become really scary and dangerous. In reality we all know it’s just a spectacle and while it may not be scripted it’s definitely taking complete advantage of all the classic tropes of the rock ‘n’ roll show. This does not matter doodly-squat though as the band are red hot. Daddy Long Legs lead singer – Brian Hurd – is preacher in chief, armed with a gravel scoured baritone and the moves of a high-strung Vincent Price. Prowling the stage, casting his eyes to the heavens then fixing the front row with a fierce unflinching glare. He owns a devil’s purse of exhortations, exclamations and encouragements for his audience, which he makes damn sure to use with a rush of shrieks, howls and yelps that keep us moved and moving whenever there is a moment of between tune respite; “It’s Sunday night ’n the feelin’s right, amen brothers and sisters.” Indeed, again.

The three of them, individually and as a whole, are not afraid to employ any rock ‘n’ roll pose or cliché that will drive the audience further on their journey of rock ‘n’ roll redemption (or is it damnation?). Each move or exclamation offered by the band looks or sounds so god-damned right in its place in the sermon that it is impossible not to answer in-tongues with the fervor of a Baptist revival meeting congregation. Tonight we are many and we are all here to praise at the altar of messes Hurd, Akturk and Styles. We do not hold back and the responses of our fevered rock n roll crowd are many and raucous -‘Oh Yeah!’. It is not clear if it is god or the devil compelling this band’s mission but who cares? We’re in the congregation and the devotion is good, either way, “We got the rock n roll that’s gonna save your soul”. 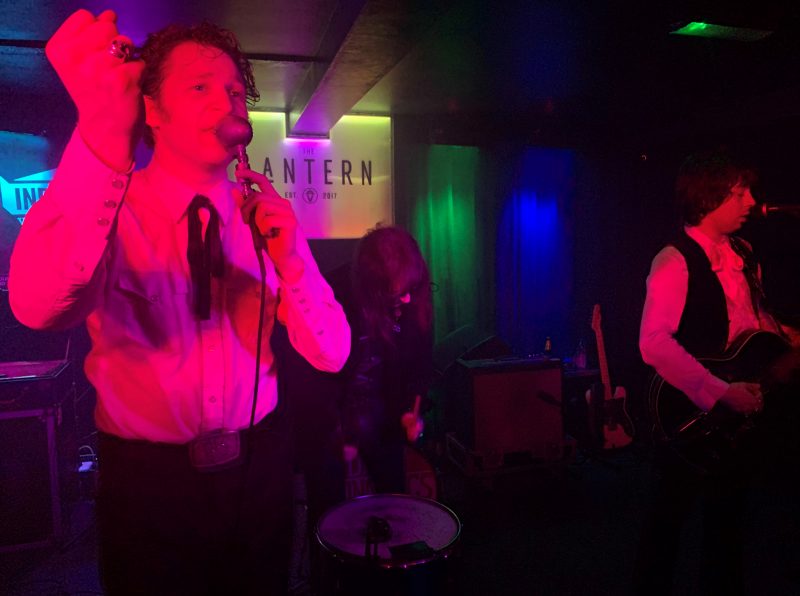 Apparently Kim Fowley believed Daddy long Legs to be the “evolution of pagan rock ‘n’ roll music” and listening to their roots-mangling version of rock ‘n’ roll in Northern England on a miserable Sunday night it’s not hard to see why. With a set that is a mix of ear-bursting, amped up delta blues (Tommy Johnson’s ‘Big Road Blues’), rockabilly, garage punk and hillbilly mountain music together with the newer elements of their sound such as the Lew Lewis aping pub rock of ‘Winners Circle’ we are treated to the full DLL experience. We get early favourites like ‘Motorcycle Madness’ and ‘Blood from a Stone’ together with newer selections from the latest LP ‘Lowdown Ways’ such as ‘Glad Rag Ball’, ‘Bad Neighbourhood’ and ‘Be Gone’

“We’d like to invite ya’ll to a little party we’re having, will you join us let’s boogie on into the night?” 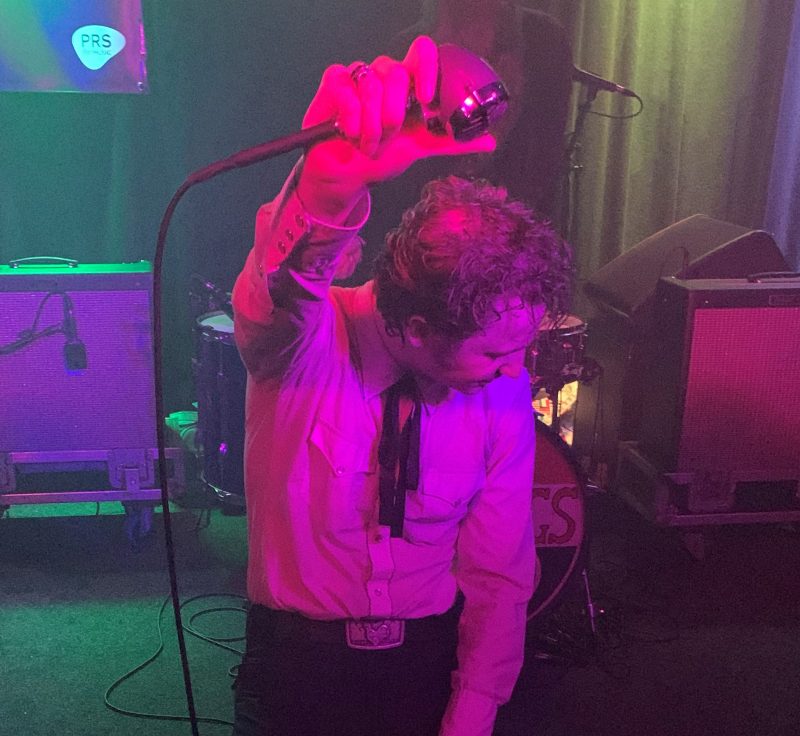 The sound is driven by the band’s compulsive need to boogie, dripping with Hurd’s harmonica a-crying and a-wailing song after song. Akturk’s guitar ringing out remarkably clear and precise whilst remaining spectacularly exciting on classic riff after riff whilst Style’s drumming is suitably, thunderously primal; whether playing his full kit (all three drums and not a cymbal in sight) or strolling the stage (and dancefloor) with a single drum and maracas he makes Meg White sound like Levon Helm. All together we get a bone-rattling stomp of boogie, rhythm and tunes and we respond accordingly, moving as one in a singularly unsexy audience ballet.

People make claims for art forms of all kinds to be transformative or redemptive or liberating or some other such grand impression. I don’t doubt these experiences one bit; people are surely moved by powerful theatre and movies, eminent paintings or great books but the power of gutbucket rock ‘n’ roll,  like we experienced in Halifax on Sunday past, is surely the equal of any of these, and for me it’s the one.  I’m not sure it can actually change anyone’s world but it sure makes you feel a whole better about the one you are in.