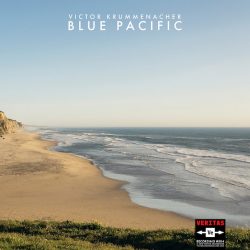 Successful artists and writers achieve their critical acclaim when they can translate their experiences and emotions onto a canvas of their choice, be that the written word, the painting, the song. The success of this expression is as much about honesty as just about anything else. Victor Krummenacher’s 9th solo album is a prime example, with a rich diversity of songs that are reflective, driving, upbeat. The artist admits this album is ‘more autobiographical and directly honest than anything I’ve done’ and the depth of that honesty is clear coming a year or so after a divorce.There are songs about escape and regret and worry and unfulfilled revenge with perhaps a spoonful of bitterness….but also hope.

This isn’t to say that the album is in any way predictably chronological; there is no start, middle and end of a story as such. The short opener ‘No One Left to Remember and No One Left to Tell’ gives the fullest sense of being out in the early hours of the morning on quiet city streets. ‘Skin and Bones’ has a smart steel guitar and organ opening, the song telling of sleepness nights where “your mind is racing….just worry yourself to skin and bones.” A very effective accordion and guitar combination opening ‘No Safe Place to Fall’ is followed by an equally effective steel guitar and fiddle opening to ‘Headed West’, both tracks sitting perfectly in the middle of the album.

There are clear influences across ‘Blue Pacific’, from Bruce and the E Street boys on the dynamic ‘Prettiest Train’, with references to next trains, crossing rivers, and going home, only in this case to New Orleans and not New Jersey. A flavour of Tom P and the Heartbreakers on ‘Every River Rises’ and even gentle nods to Krummenacher’s other prog rock projects on a couple of songs, including ‘Find a Way Out’.

But there is no doubting the biggest influence is Pete Townsend, both in some of the music and the production. ‘Lawrence in the Desert’ and title track ‘Blue Pacific’ both greatly enjoy the PT treatment. And listeners will be oh, so the happier for it.

An honest album of roots-rock Americana

About Russell Murphy 41 Articles
Can't get enough of this Americana stuff. Live or recorded, it's all good to me....