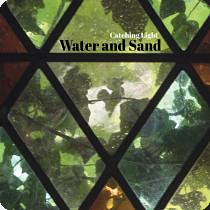 Water and Sand are the collaborative project of established songwriters Todd Thibaud and Kim Taylor. ‘Catching Light’ is their second album together following a self-titled debut in 2016. Thibaud fronted The Courage Brothers before releasing the first of his many solo albums in 1996. Taylor has opened for Kris Kristofferson and Ron Sexsmith as well as writing music for a string of TV shows and more recently taking up acting.

Thibaud and Taylor share the songwriting duties, with each taking the lead on their own songs. On a couple of occasions they come together to sing a duet. One such moment is ‘Mona Lisa Sideways’ which quite apart from having an intriguing title, provides one of the album highlights. Whilst both singers have strong voices, it is the Thibaud compositions that tend to catch the ear. ‘Right Next to You’ and ‘Unbound’ are cases in point. Not that he has it all his own way; Taylor’s ‘So Long’ gives her partner a run for his money.

All in all this is a very listenable album with some strong songwriting and a mellow acoustic vibe. However, it’s hard not to feel that it lacks something. Many reading this will have stood or sat through a support act and then nodded “yeah, that was ok” before swiftly moving on to the main attraction. Listening to ‘Catching Light’ feels very similar. There is little to dislike about it, but  ironically it fails to catch light.