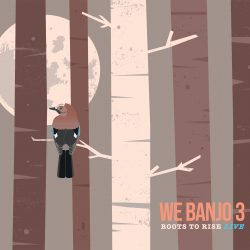 The ‘Roots to Rise Live’ album shows very clearly that award winning Irish Band We Banjo 3 are a fantastic live act. Packed full of intricate banjo and fiddle playing, some beautiful vocals and lots of enthusiastic audience participation, it’s clear they are not a band to be missed when touring. Recorded live on February 27 and 28 at The Ark in Ann Arbor, Michigan, the album is a celebration of roots and bluegrass music and includes a mixture of original and traditional tracks.

We Banjo 3 are actually a quartet comprising two sets of brothers – Enda and Fergal Scahill and Martin and David Howley. Hailing from Galway and Nashville, they’ve labelled their particular genre as Celtgrass.

Can we get one thing out of the way? This reviewer is a fan of Bluegrass, but is not a fan of a live album. It makes ‘Roots to Rise Live’ difficult as it feels like a party I should be at, but not one I really want to listen to if I can’t be there getting involved and singing along. That said, there are some great moments on this album only due to the fact that it is live, so let’s reserve judgement for now.

This is music meant to be shared and danced to, so rightfully traditional tracks like ‘Puncheon Floor’ and ‘John Brown’s’ get the audience clapping along, whooping and hollering. Both instrumentals, they showcase the skilled banjo and fiddle playing through tight musical arrangements.

Thankfully, the audience is respectful of quieter tracks such as ‘Haven’ and ‘Hold Onto Your Soul’, both penned by We Banjo 3. The fact that you could hear a pin drop over David Howley’s beautiful vocals is testament to the sentiment of the songs. ‘Hold Onto Your Soul’ is particularly dark and emotive. The delivery of lyrics such as “if you’re awkward and lonely and don’t fit your skin…you’re looking for an out because you can’t find an in” is chilling. The fiddle soars in the background and it would be surprising to find a dry eye in the house after that.

But then it’s back to the party! ‘Prettiest Little Girl’ is great fun. An unexpected segue way into Stevie Wonder’s ‘Superstition’ really gets the crowd going.

The thing that jarred a bit with this album is that there was no banter with the crowd (apart from an obligatory “Let’s hear you sing” on ‘Little Liza Jane’). So that, accompanied by the, at times, abrupt cut off from applause to new track, felt like the album was a bit soulless: let’s move on, no time for appreciation or chit chat. This was a real shame as there’s obviously a lot of love for We Banjo 3 in the room.

We Banjo 3 are also doing good things by partnering with Mental Health America on their Roots To Rise tour to raise funds and awareness for the organization. The band donates $2.00 from the sale of every t-shirt to MHA.

As noted, the musical and lyrical ability of We Banjo 3 is not under question at all: they sound amazing. And hey, if this live album gets more people along to their shows, it’s done its job. The takeaway message then is, join the party – don’t just listen from afar (because it’s not as good as the real thing).

Celtgrass party you want to be at